A slip of layered tulle, with a lining of sheer beige mesh overlaid with bright pink cotton bobbinet. Tightly stitched ruffles of raw cut pink tulle wrap around the body in stripes of varying widths. This garment is from the ‘Frou Frou’ range of the Créateur collection, a collaboration between French couturier Jean Paul Gaultier and heritage luxury lingerie house La Perla. The collaboration was launched to the market in 2010 to great critical acclaim at a particularly high price point. The bra within this range originally  retailed for $705, and the coordinating briefs for $535. The range was available in three colourways: this bright pink, blush pink and black/beige. The collection was particularly noteworthy for its use of intricate and time consuming embellishment techniques, many of which are rarely used in contemporary design.

Jean Paul Gaultier founded his eponymous label in 1977 in Paris, France, and soon became renowned as the ‘Enfant Terrible’ of French fashion for his daring and playful approach to design. The label encompasses a fashion empire that covers haute couture, ready to wear, eyewear and perfume. Many of his designs have been strongly influenced by historical lingerie designs, with famous silhouettes including dramatically shaped corsetry and exagerrated bullet bras. The designer has collaborated on a number of ‘ready to wear’ projects, including with the label Wolford in the late 1990s, and with La Perla in the early 2010s.

La Perla was founded in 1954 in Bologna, Italy, by master corsetmaker Ada Masotti. The brand’s name (‘the pearl’) came from the decision to present lingerie as fine jewellery, with the associations of luxury and femininity. The first brand collections were even presented in velvet-lined boxes. The brand treated lingerie as a fashion accessory rather than simply a clothing necessity, using fine fabrics such as French leavers laces, and silks.

From the collection of Karolina Laskowska 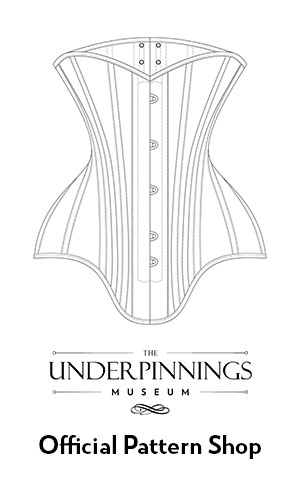