Synthetic fibres suffered a serious image problem in the late 1970s and by the early 1980s, natural fibres were making a comeback with garments made from fibres such as cotton and linen were being marketed as luxurious in a way that only silk had been previously. Only Lycra, with a massive relaunch and marketing push, survived unscathed and at this time the concept of different bras for different occasions or activities featured in the advertising for many big brands. Consumers were being sold a wardrobe of bras rather than one version of perfection. Synthetics entered a new era when Japanese textile companies developed microfibres. Finally synthetics became ‘breathable’ and the microfibre versions of nylon and viscose were launched and used extensively in the production of underwear in the 1990s. Du Pont branded their nylon microfibre Tactel, and Courtaulds branded their viscose microfibre Tencel.

Although technological advancements have played an extremely important part in the development of the bra since 1930, there have actually been relatively few completely new features introduced since the late 1970s. The story of the technological changes to the bra is one which owes a lot to the skill of pattern cutters and textile chemists plus the creativity of designers, manufacturers and, occasionally, retailers. However, it would appear that the only technological advancement that bra designers and manufacturers have yet to perfect is the one which really does ensure all-day comfort.

An underwire bra in a delicate floral blue and white printed terylene, a type of polyester. The cups are embellished with a strip of ruffled terylene with an embroidered scalloped edge. The shoulder straps are made of this same fabric and are adjustable with enamelled metal sliders, and can be detached with enamelled metal hooks.  The centre back has a strip of fabric covered elastic, allowing a little fit adjustability. It closes with hooks and eyes, offset to the side back of the garment.

Calico Printers Association in Accrington, Lancashire, made the first test tube filament of polyester in 1941. The rights were then sold to Du Pont (who branded it Dacron) and ICI (branded Terylene) in 1946. British wartime clothing restrictions were lifted in 1952 and it was then that the production of Terylene clothing really took off in Britain.

The M&S Company Archive in Leeds holds copies of staff magazine St Michael News, which was published and distributed to all personnel between between June 1953 and Christmas 1990. Terylene/cotton printed bra and bikini sets feature in St Michael News between Autumn 1967 and Spring 1969.

Estimated to be early 1970s (much like a similar style bra in the Museum of London’s collections). The Lurex Company was founded in 1973. Its yarns often have a polyamide, polyester or viscose film covering the metal strand and the softness of the fabric on this bra’s cups indicate that this may be constructed with Lurex fibre, although the label states that it is composed of 66% metallic fibre and 34% nylon. [compulsory fibre content labelling on garments in the EU (then called the European Economic Community) was introduced from 12 January 1976.]

The bra is simply constructed, with triangle style cups with a single dart for shaping. They are applied to an elastic band with a coverlock stitch.  Shoulder straps are made with nonadjustable strips of elastic and the bra fastens with a single enamelled hook at the centre back.

Mary Quant opened her first boutique, Bazaar, on London’s King’s Road in 1955. She is said to have invented the miniskirt, but claims that it was actually her customers who invented it by always wanting shorter hemlines. She merely gave the style its name.

Famous for her youthful womenswear in 1960s ‘Swinging London’, she also designed patterned tights to be worn with her short skirts and hot pants, and branched out into other areas (including underwear, make-up and homewares) in the 1970s and 80s. Her husband, Alexander Plunket Greene, came up with catchy names for many of her product lines – bras were called “Booby Traps”. In her 2012 autobiography, Quant spoke of advising US retailer JC Penney on underwear in the 1960s:

“I later persuaded them to make more naturally shaped bras. Somewhere there exists a photograph of me, very small and mini-skirted, lecturing those very charming large American men about the shape of breasts. I remember, with some embarrassment, quoting Collette to them: ‘Breasts are shaped like half a lemon – the interesting half. They are not tennis balls.’ And so we arrived at very soft preformed fabrics with underwired structure and other natural-shaped bras to achieve what was called the ‘No-Bra’ bra effect.”

Although moulding techniques enabled the production of seam-free cups in the 1970s, this bra follows the style of the “No-Bra” patented by Rudi Gernreich for Exquisite Form in 1967, with a single dart for shaping on each cup. 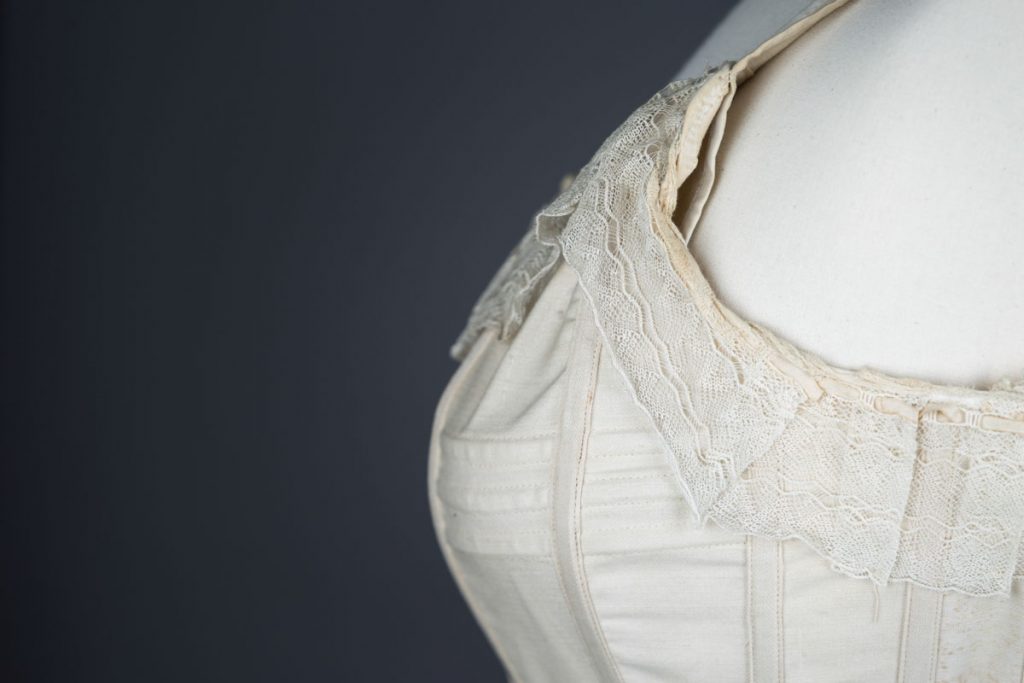 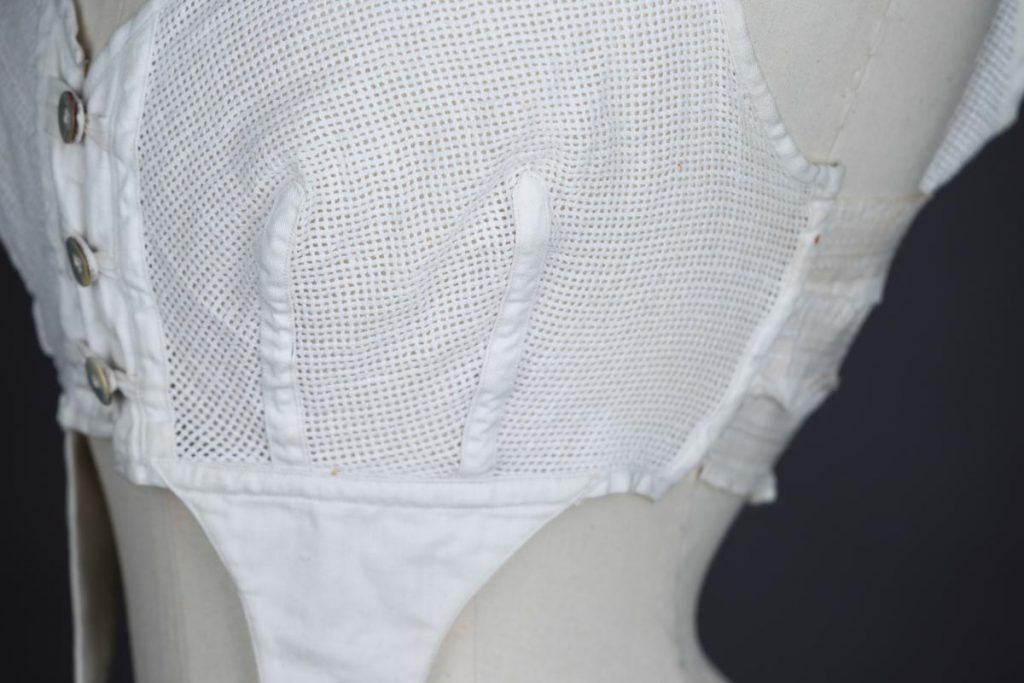 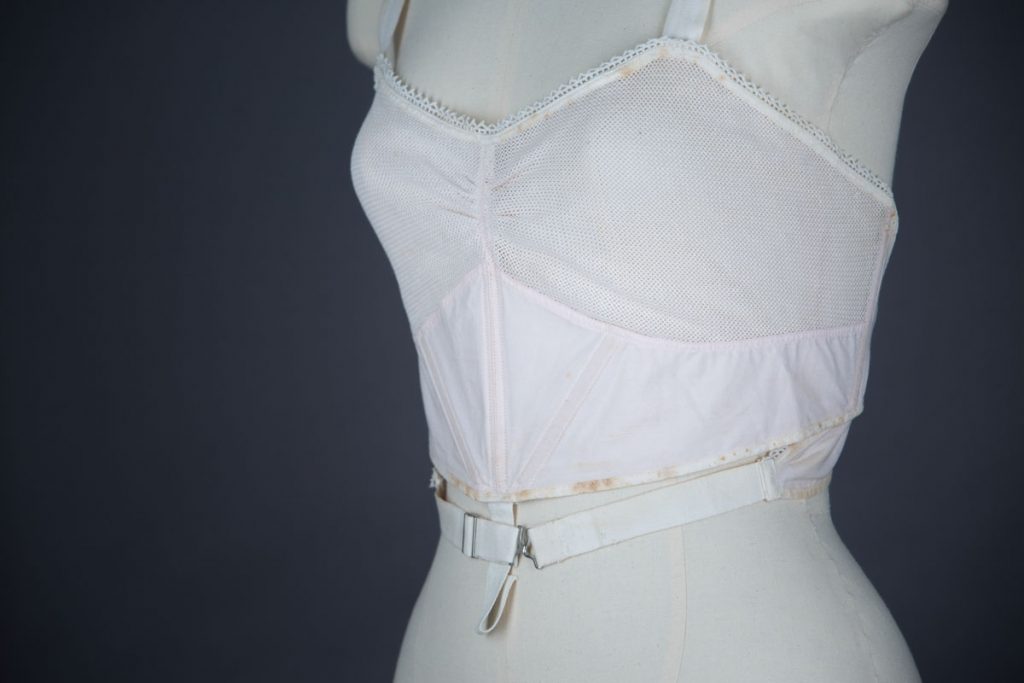 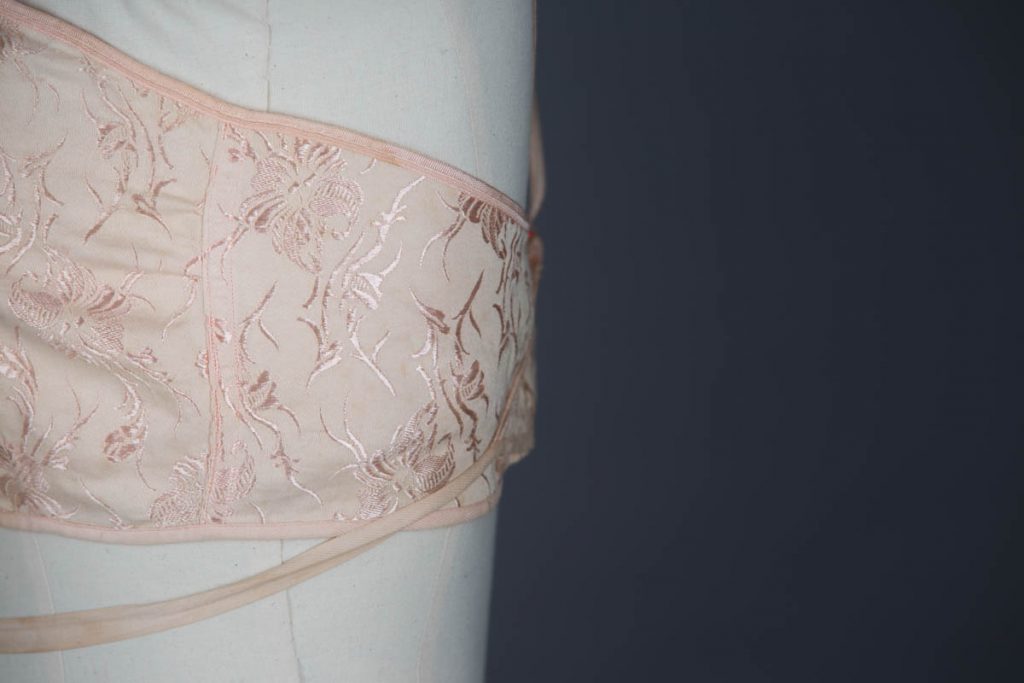 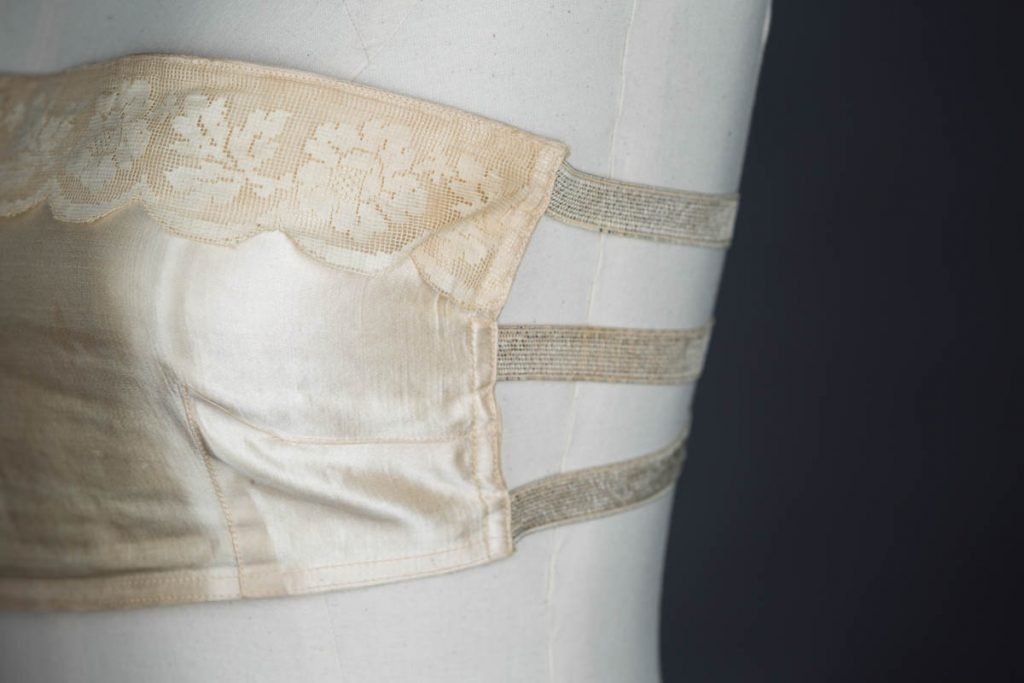 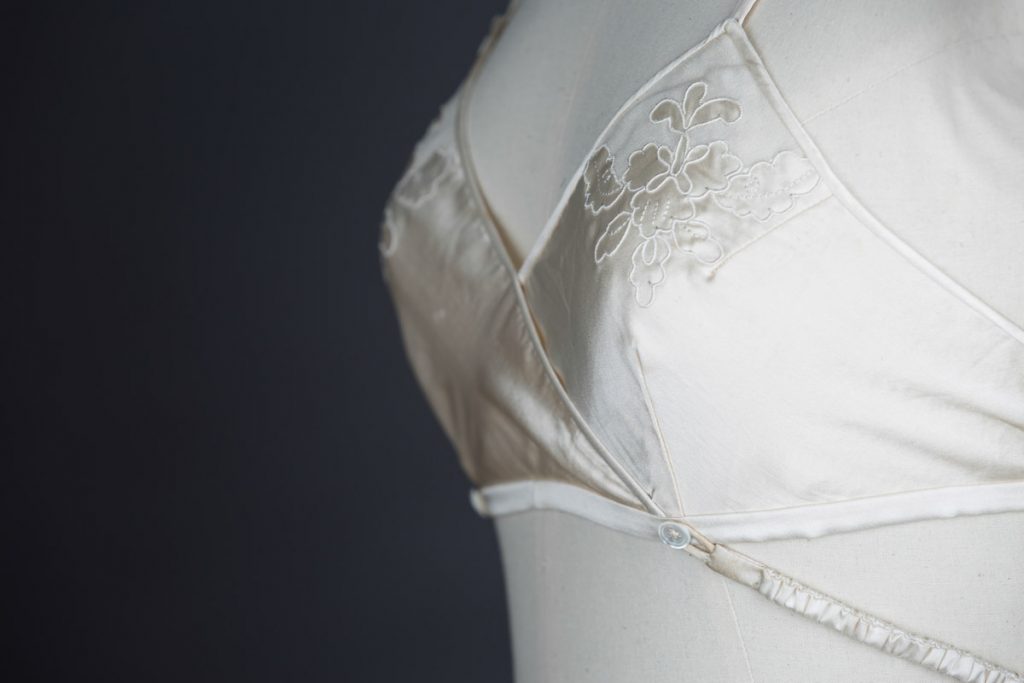 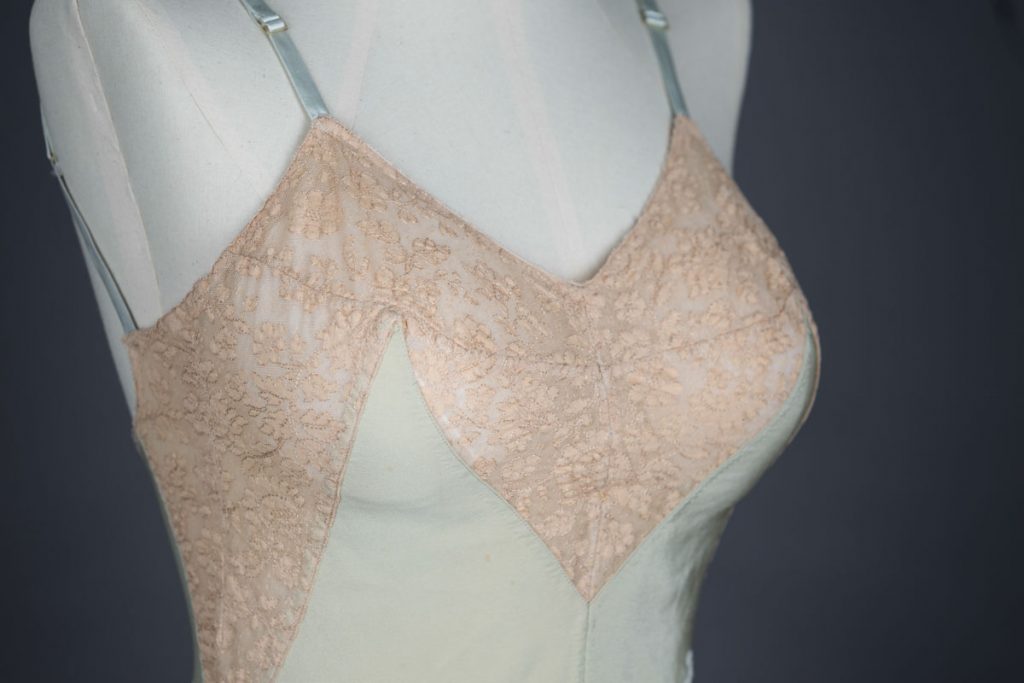 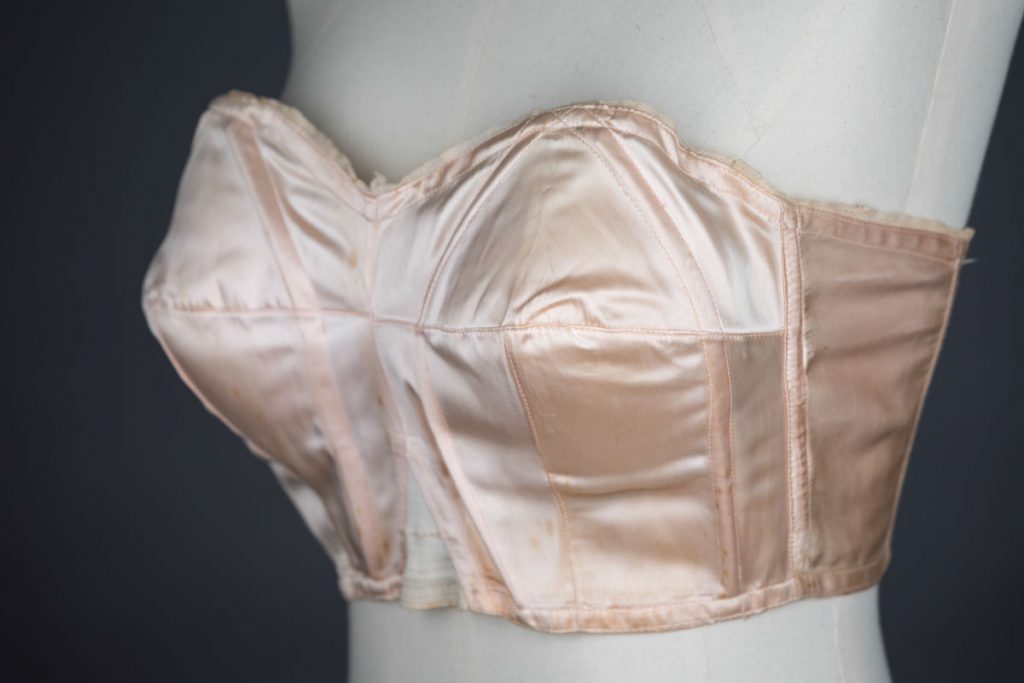 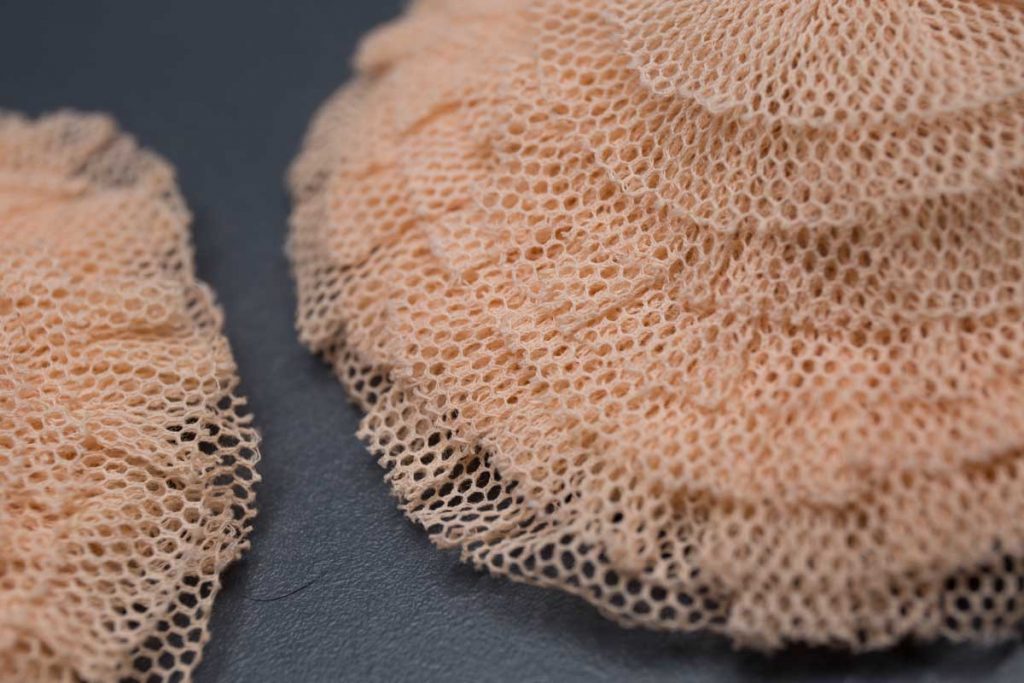 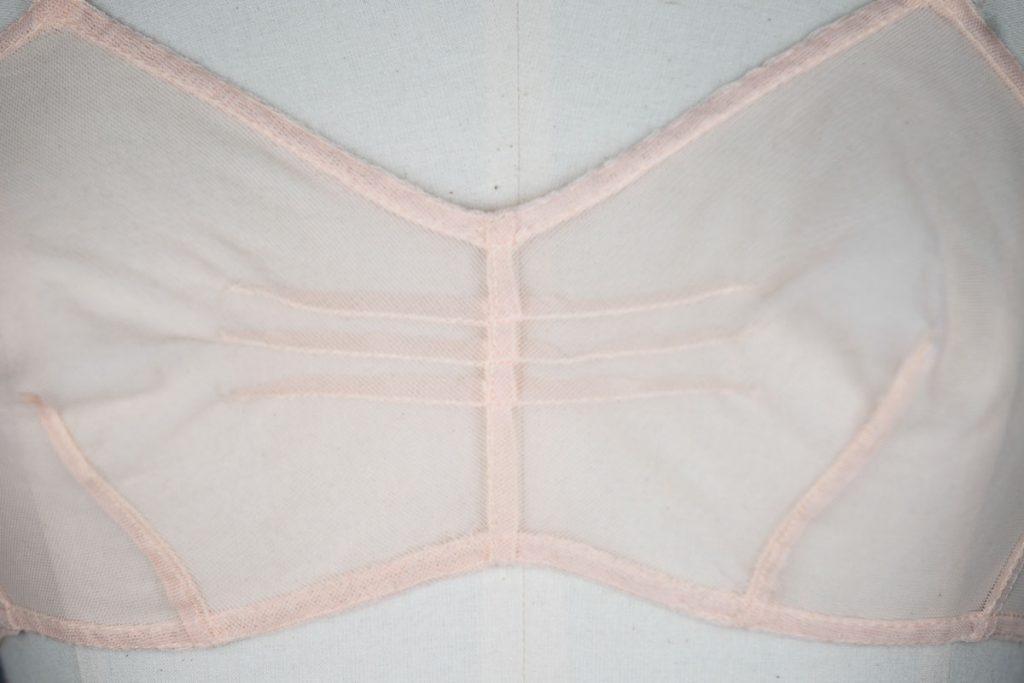 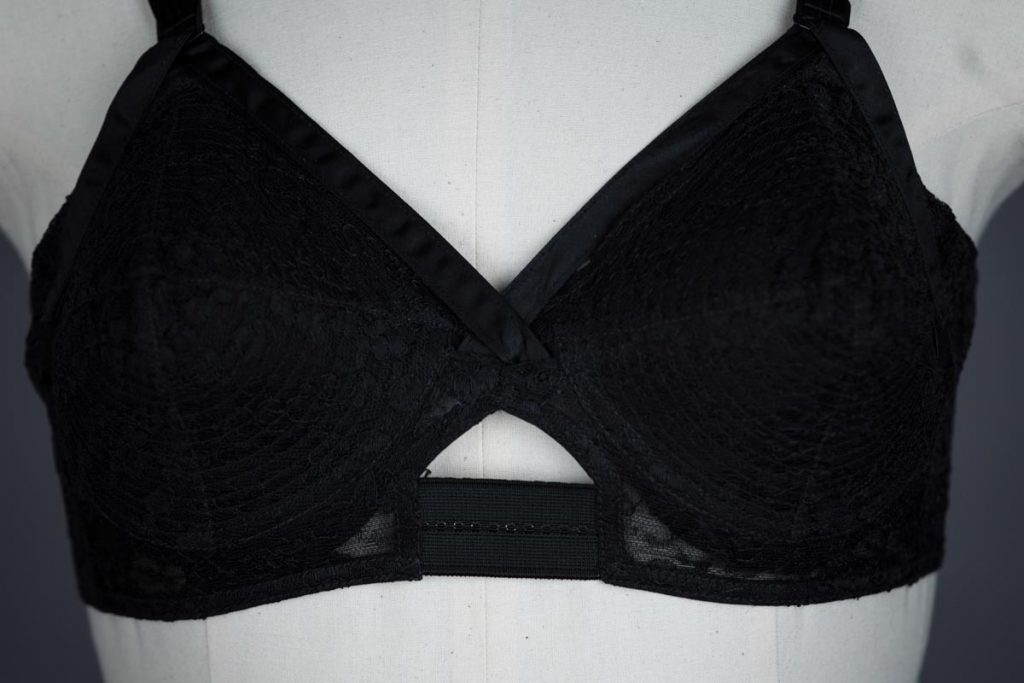 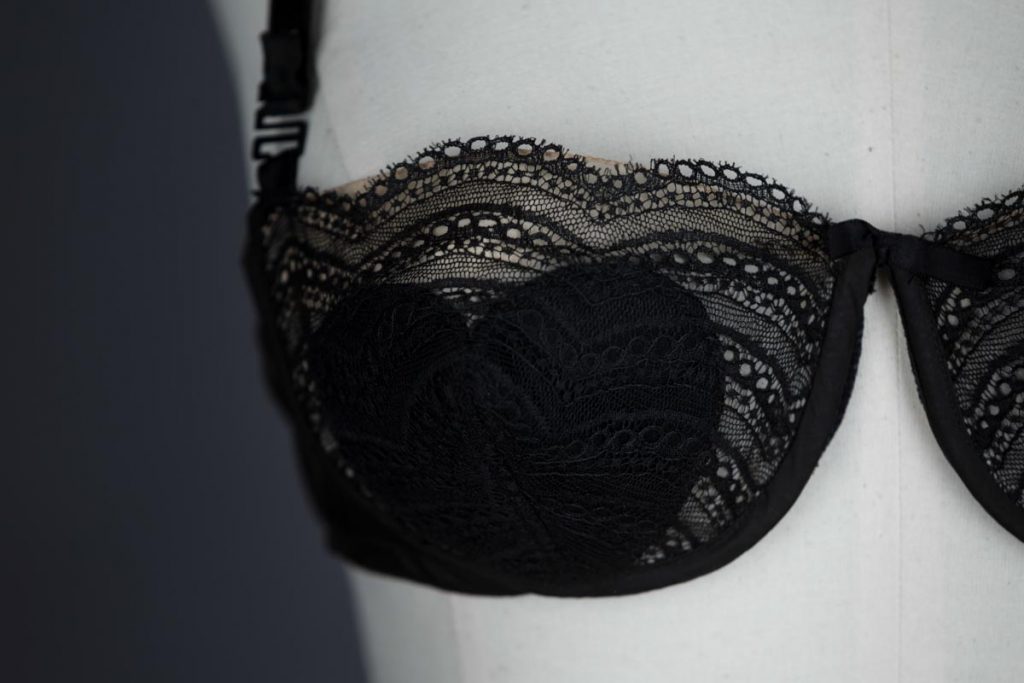 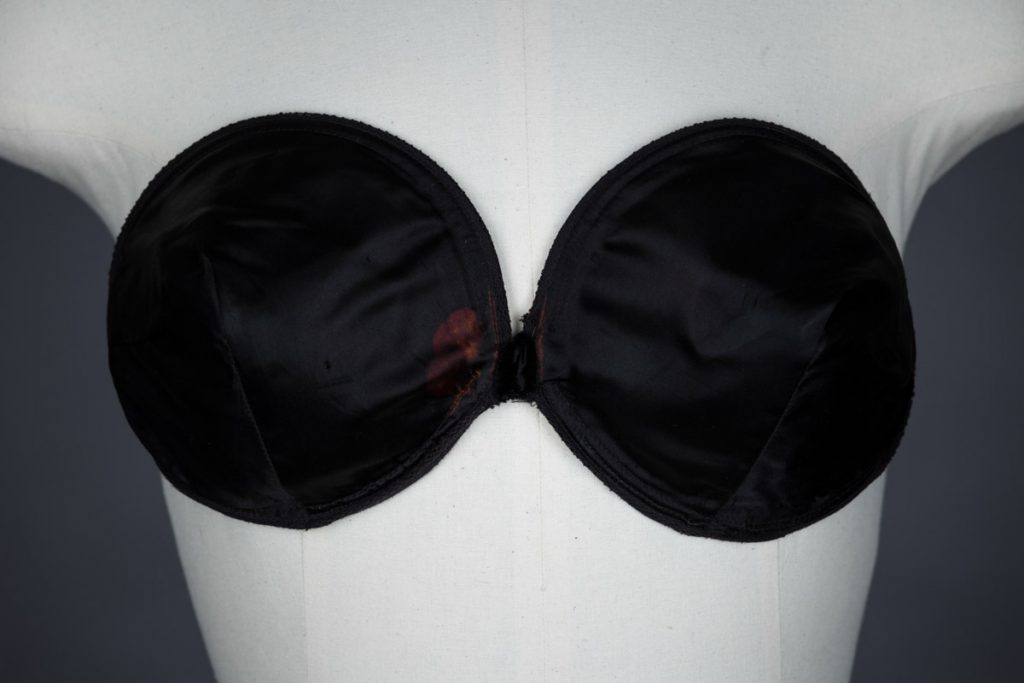 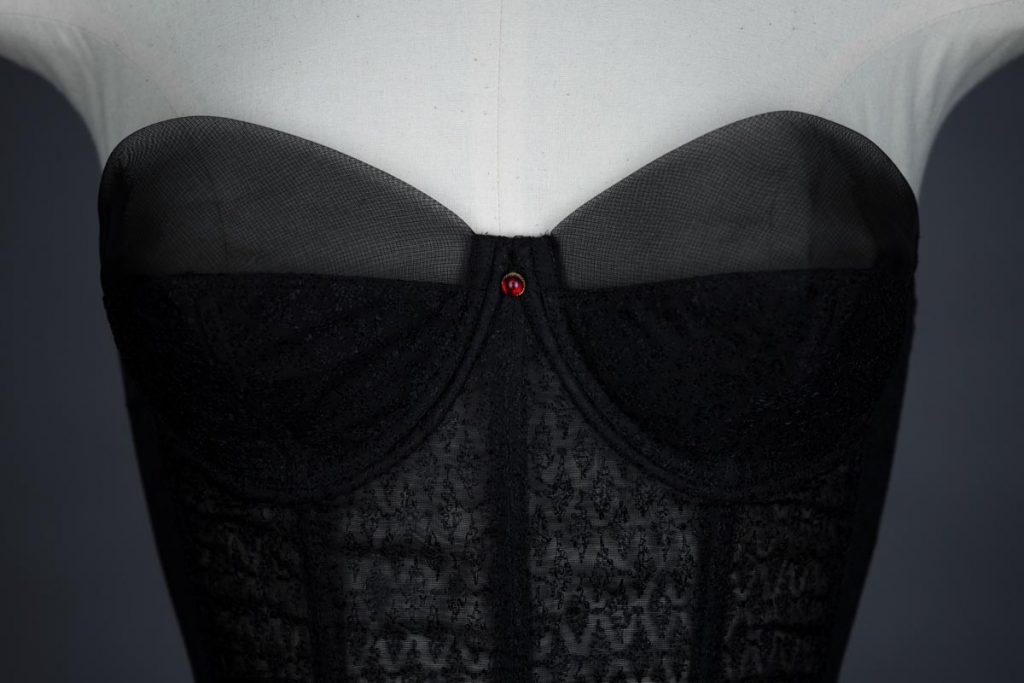 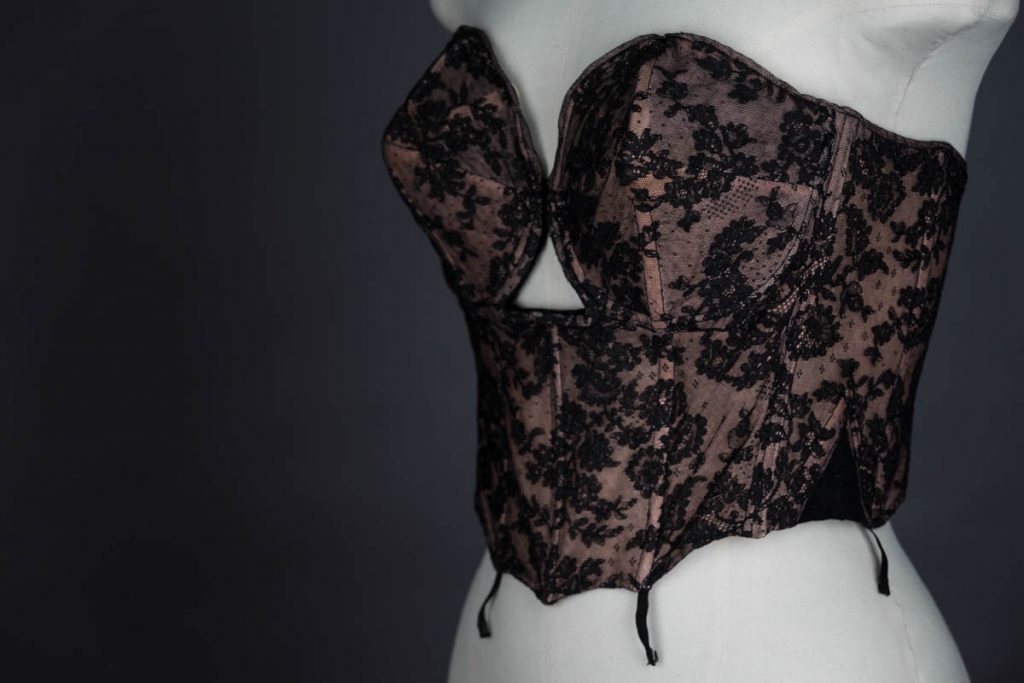 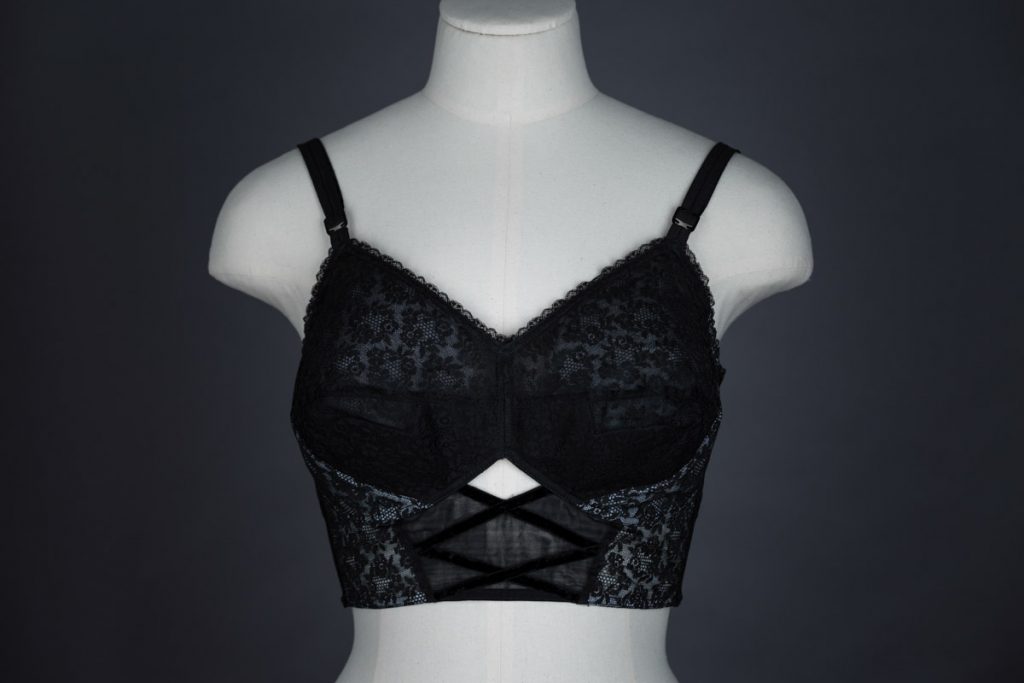 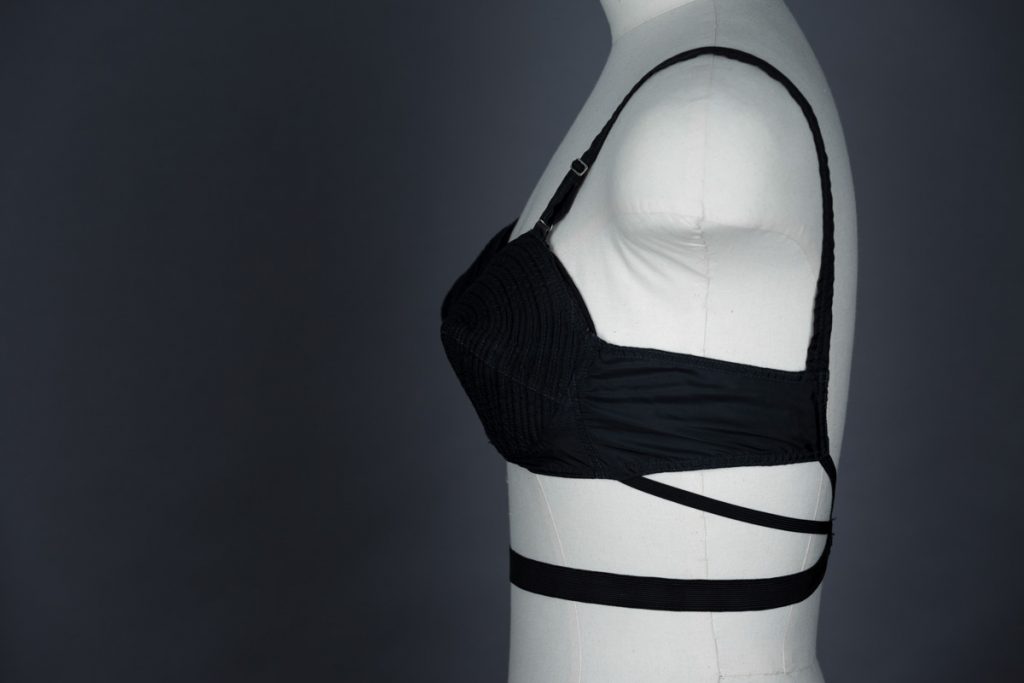 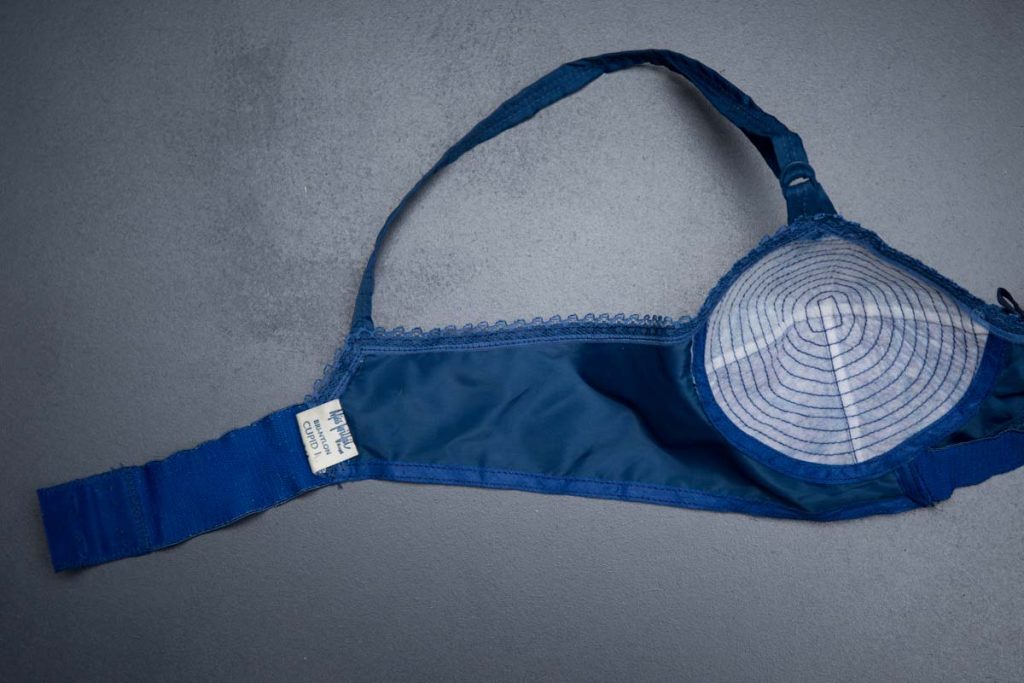 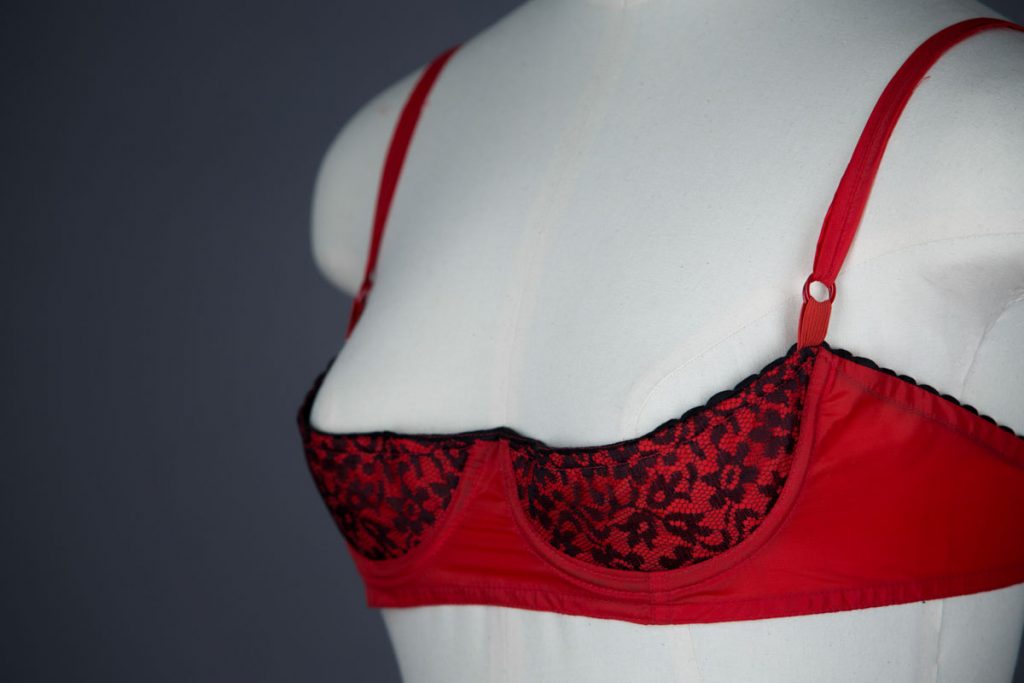 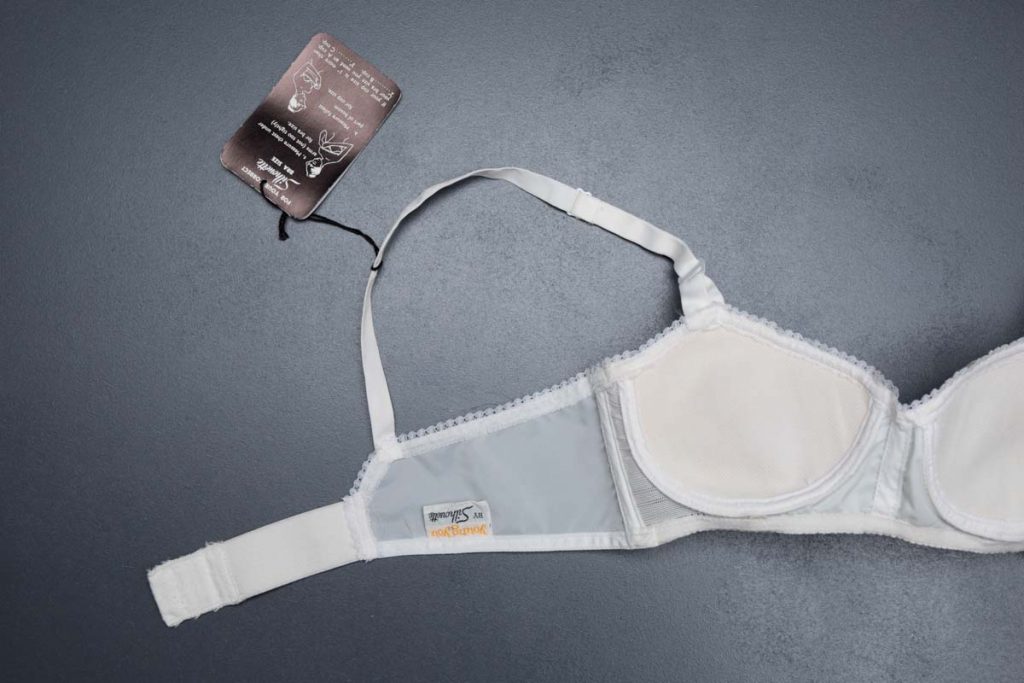 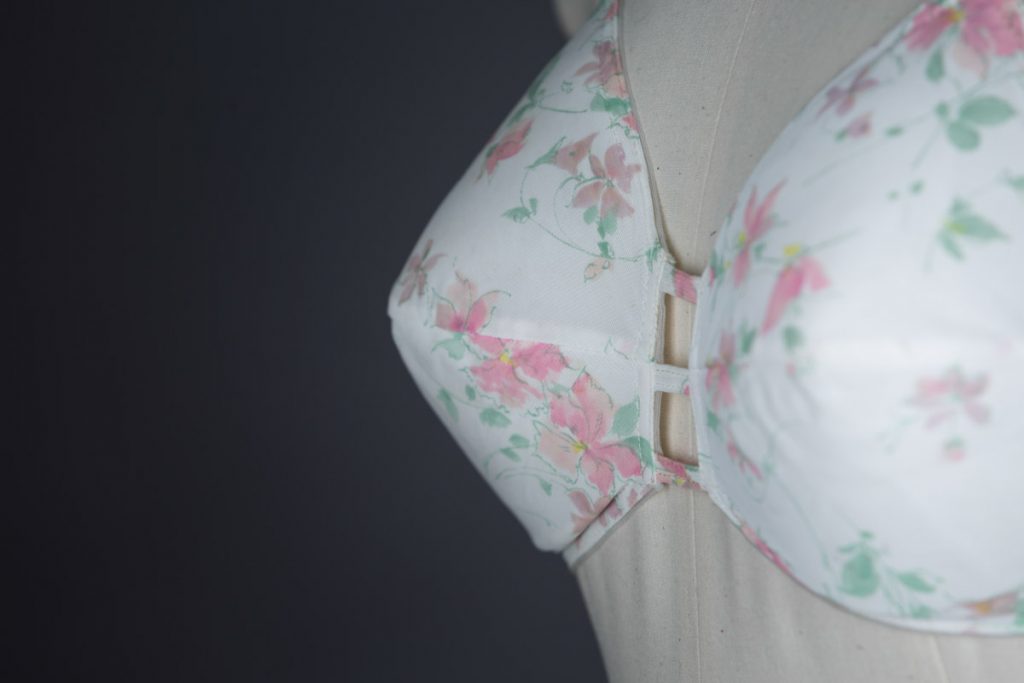 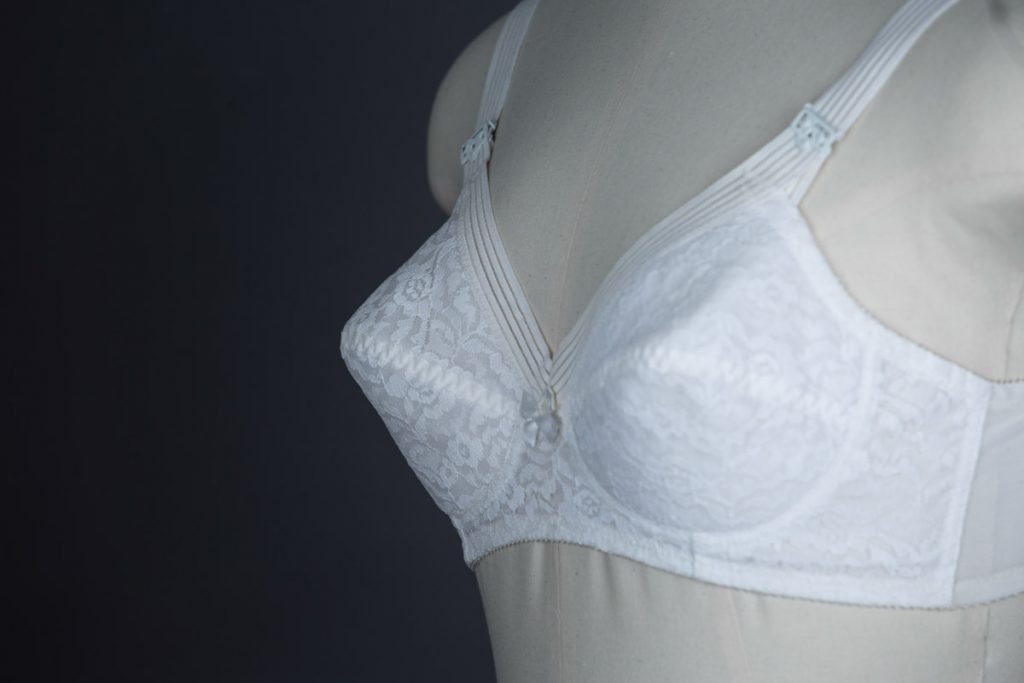 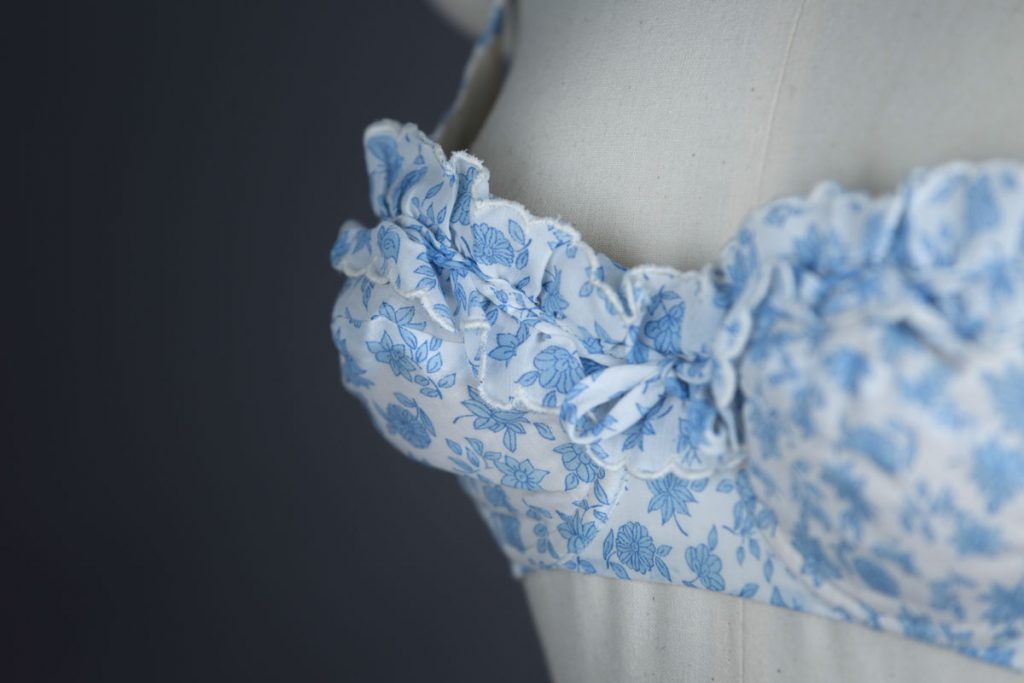 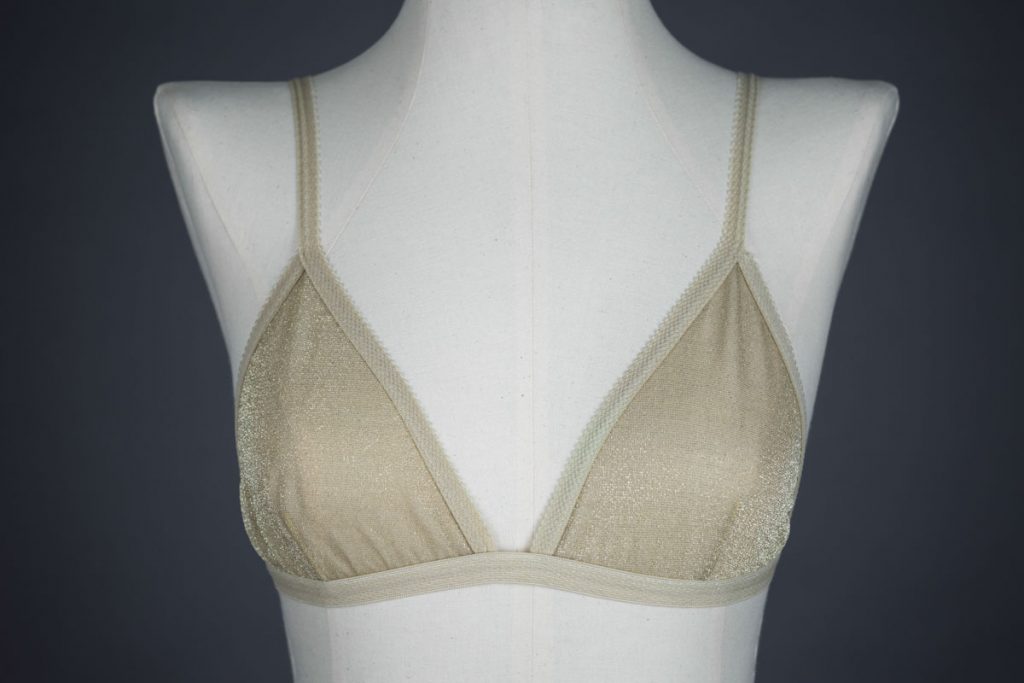 If you enjoyed this exhibition, please consider supporting The Underpinnings Museum by either shopping our merchandise range or making a donation. All funds are reinvested directly into the project to bring you even more free access historical underwear goodness.