As corsets overall increase in visibility, they also increasingly creep from structure to showpiece in modern bridalwear. Most wedding gowns rely on corset-like construction for support: layers of fabric supported by plastic or steel bones. Some wedding gowns feature faux corset styling with visible bone channels and semi-functional lacing in the back. By putting the corset on display, an opportunity is made for both visual interest and greater utility as shapewear. For example, a custom fit corset is also the only viable option to support a full bust in a low-backed design. In a truly corseted wedding ensemble, the corset and skirt are often created as separate pieces. The corset is made to be seen, with elegant style lines and/or elaborate detailing. Bridalwear creates an ideal opportunity for the corset as a canvas concept.

For designer Marianne Faulkner, the hardest part of getting married was designing her own wedding dresses. She eventually settled on an elaborate Balenciaga-inspired look for the reception and collaborated with several other designers to make the vision a reality. The corset’s silhouette is inspired by 1950s bodices and has a darted bust construction.

The course the corset took was unconventional: it was passed from designer to designer to have embellishment added piecemeal and in layers before making its way back to Marianne. After stitching the base from a single layer of cotton coutil, she didn’t see it again until she was about to wear it at the reception.

The creative team received a mood board and some key words, but otherwise were left to play to their own strengths with very little direction. The fit and silhouette were developed under the advisement of Autumn Adamme of Dark Garden. Jenni Hampshire of Sparklewren laid the groundwork for the embellishment, defining the main motif and texture. Karolina Laskowska, of the eponymous lingerie line, built on and refined Jenni’s work, using her extensive lace knowledge and collection as well as vintage rhinestones. Neon Duchess’s Hannah Light’s touch is evident in the oversized pearlescent beads, bringing a level of quirkiness that brings it to life. Laurie Tavan added the finishing touches, bringing it to a cohesive whole, all the way through to the modesty panel.

My wedding corset is absolutely a showcase of modern corsetry. The silhouette is based more on a 50s bodice, complete with a darted bust, but the embellishment is an amazing cross-section of designers with the most immediately recognizable aesthetics in contemporary corsetmaking. The collaborative nature of this project is also very modern, to my mind. When I began making corsets, over ten years ago, makers were much more individualistic. There was a lot of concern about sharing proprietary techniques while also emphasizing the idea of a “right” way to do things. Now corsetmakers have banded into more of a community and the craft is much richer for it. We are resurrecting patents yet also creating new techniques, creating our own results that are perfectly (as Jenni would say) “fit to purpose.”

The ‘Strawberry Leopard’ corset was an experiment in creating a pared down corset inspired by the antique ‘Bird’s Wing’ corset from the Symington Collection held by Leicestershire County Council’s Museums Service. The garment was supposedly named for the fact that it looks like a bird’s wing when laid flat. The original 1900s antique used an unusually high number of 21 panels per side, with a lapped seam construction enclosing a bone in each seam. The pattern for the Strawberry Leopard incorporates only 10 panels per side and offers gentle shaping rather than extreme curves.

Jenni Hampshire began creating corsets under the moniker ‘Sparklewren’ in 2009. The designer’s background in Fine Art has resulted in a body of work akin to wearable sculpture. Historically inspired silhouettes and construction techniques are paired with lush, opulent embellishment and couture construction techniques. The brand specialises in one-of-a-kind heirloom garments, with each garment taking weeks of carefully considered embellishment and craftsmanship.

Modern corsetry is many things, but the most interesting facet (to me) is the almost baroque craftsmanship of it. Pushing aesthetics and techniques to their highest points, just because you can. Corsetry is interesting to me when it is created at the edge of the maker’s abilities and artistry. So all the Sparklewren pieces I love best have had that feeling of flow, uncertainty, and anticipation about them, during the making. The satisfaction in each finished piece is short-lived. Modern corsetry, for me, is only as good as whatever you’re working on at that very moment.

All told, it’s clear that there are many avenues of exploration still left in corset design. By combining various elements and rediscovered concepts from the corset’s history, contemporary designers are able to innovate new design and construction methods to appeal to a modern audience. No longer a mandatory support garment, the changes in corset functionality have created aesthetic opportunities, including serious body modification in the form of waist training, and heavily textured showpiece corsets. 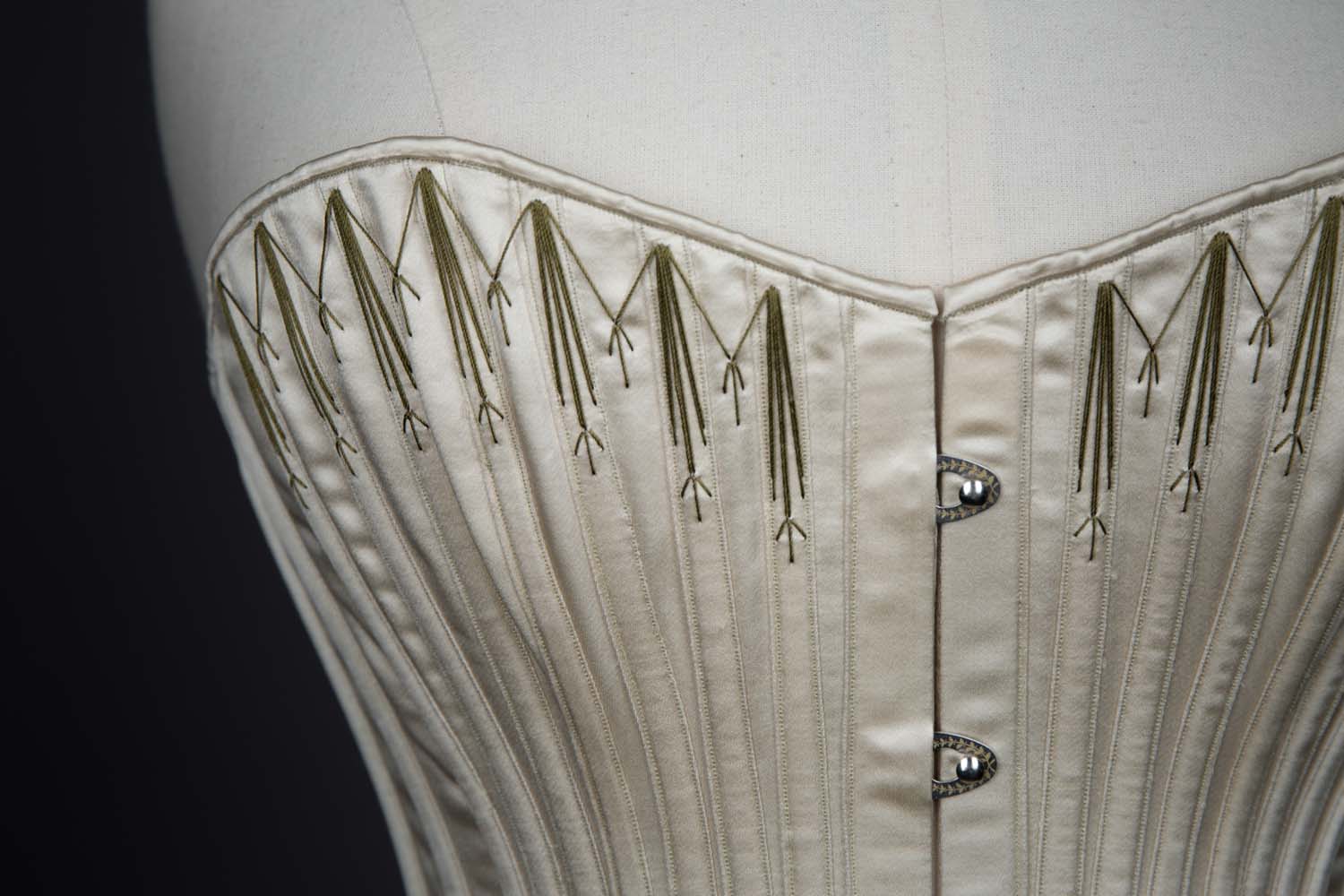 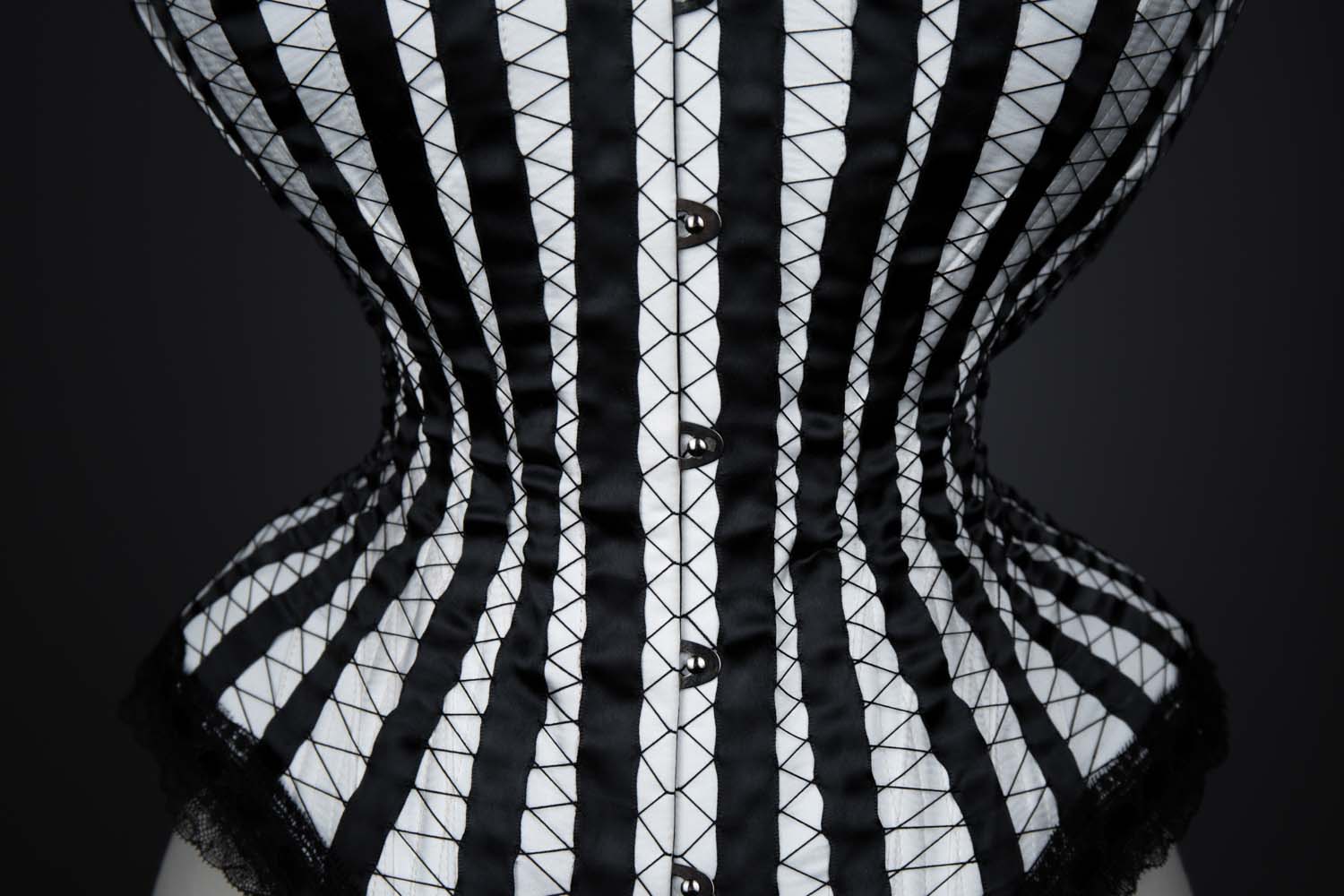 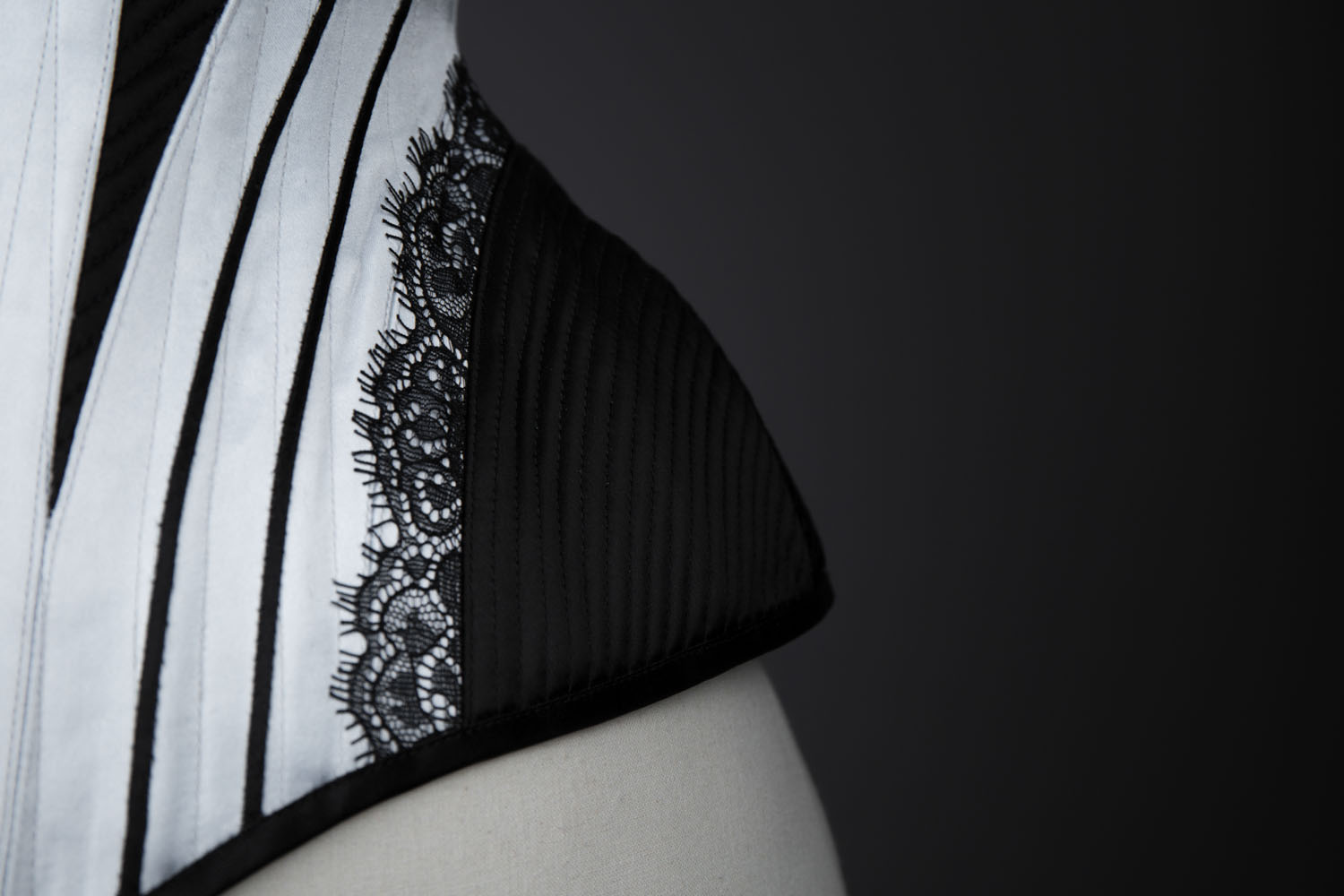 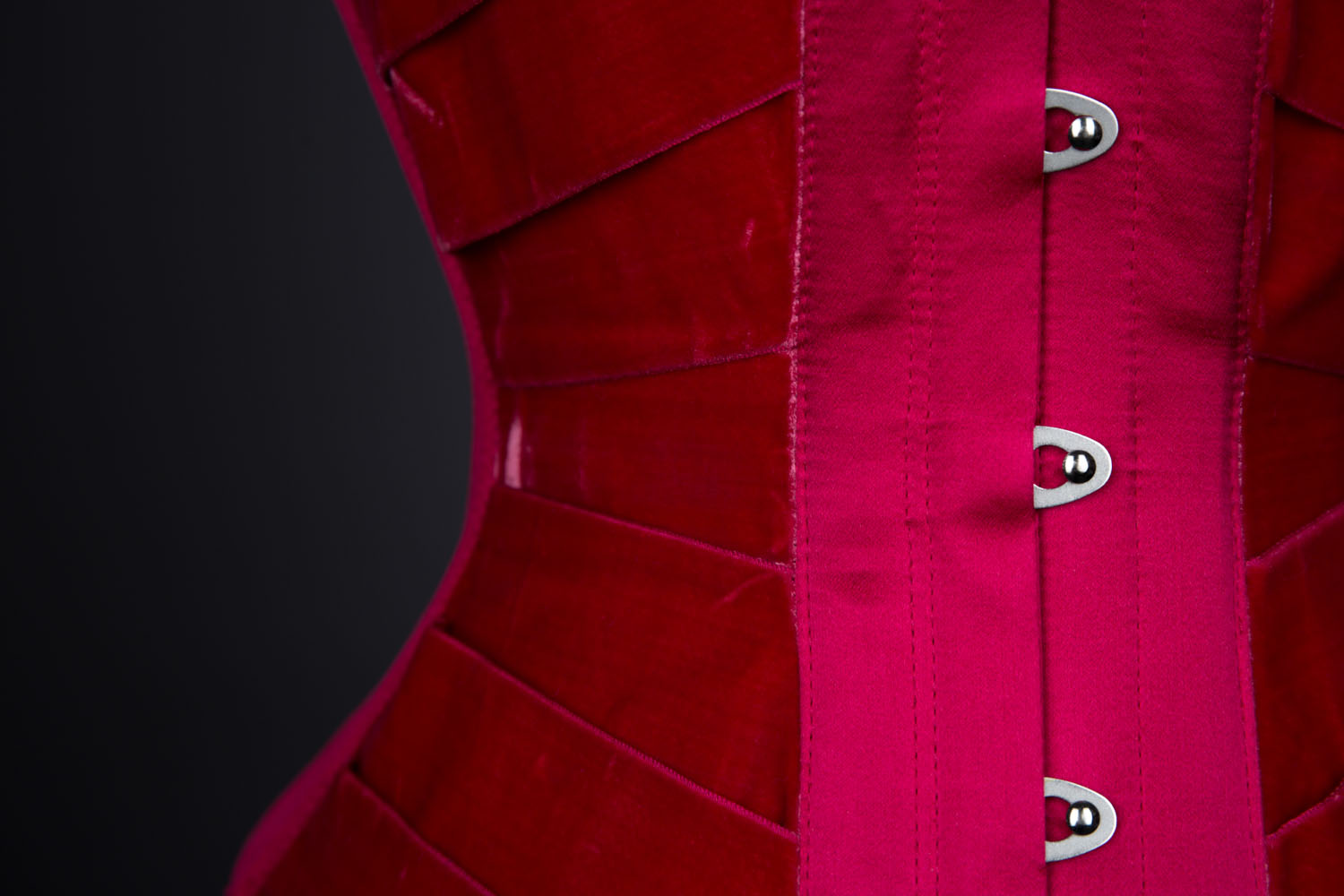 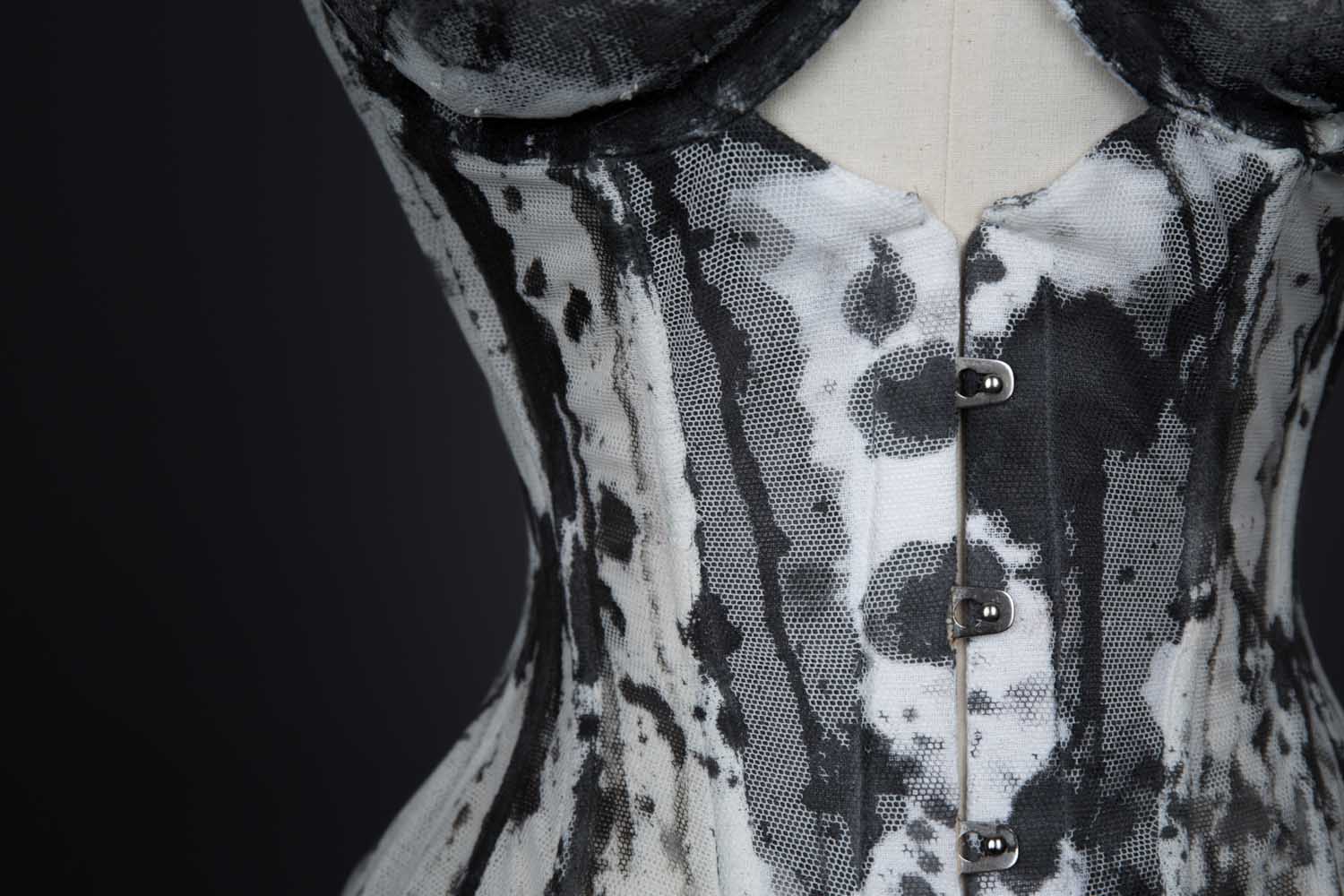 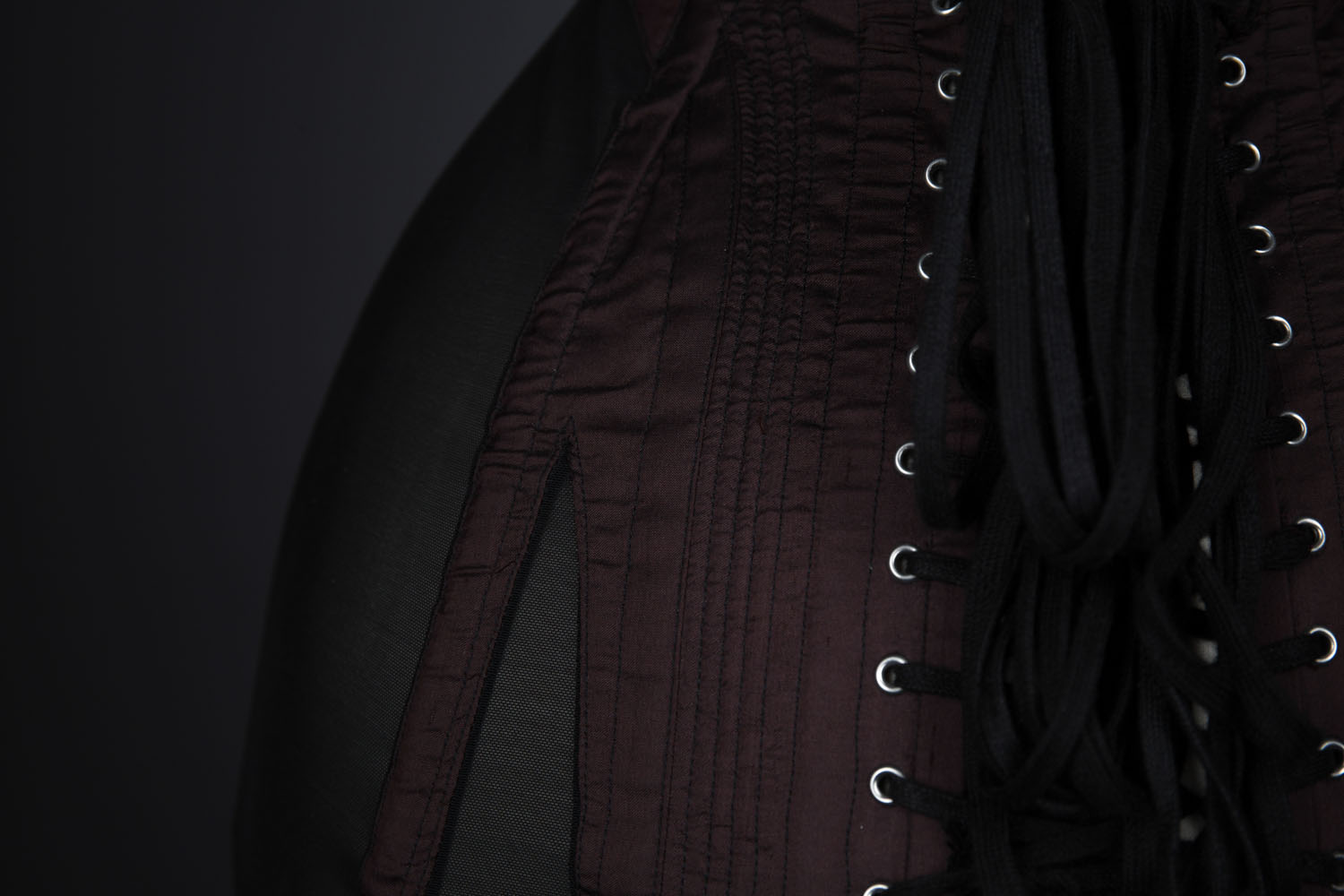 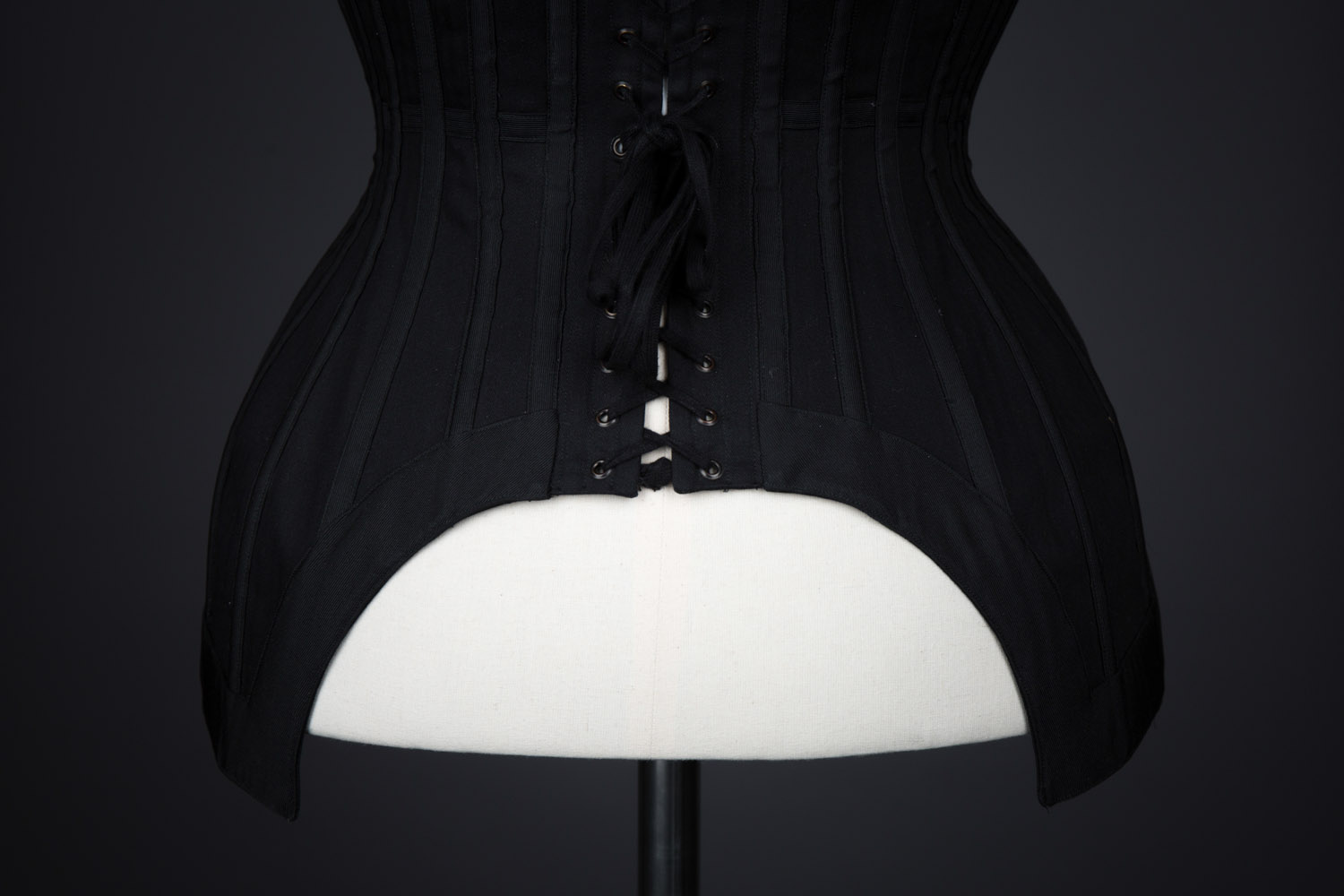 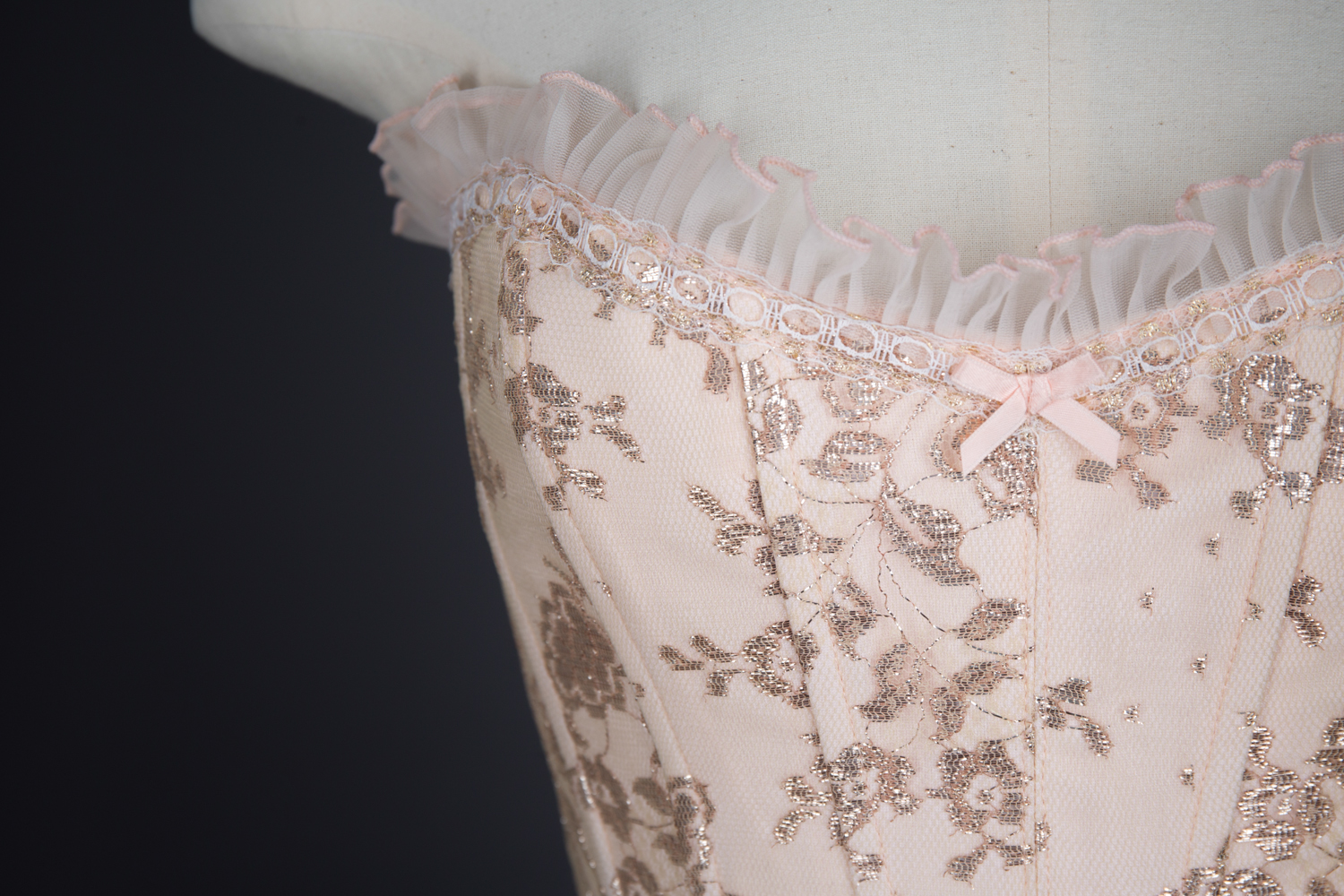 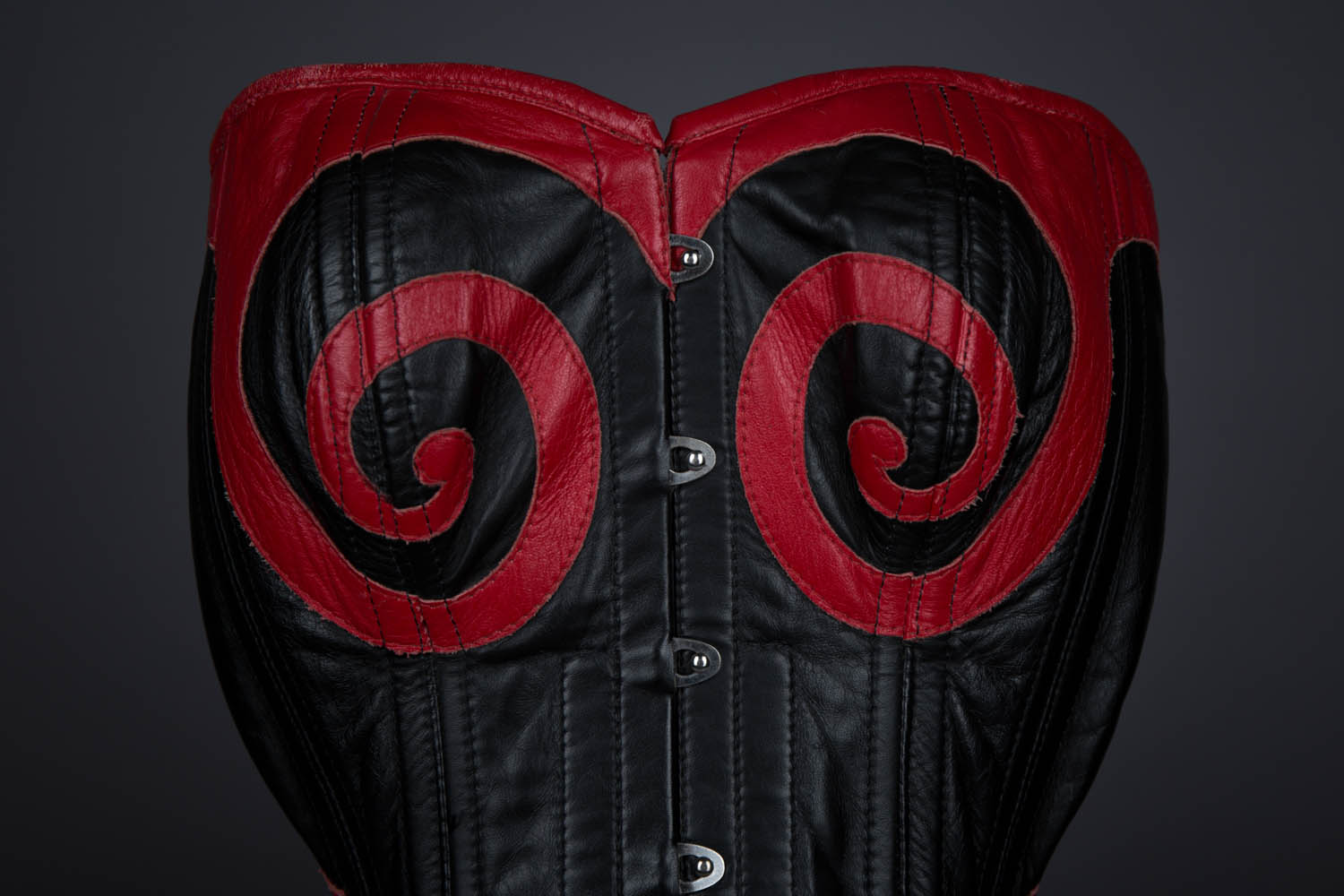 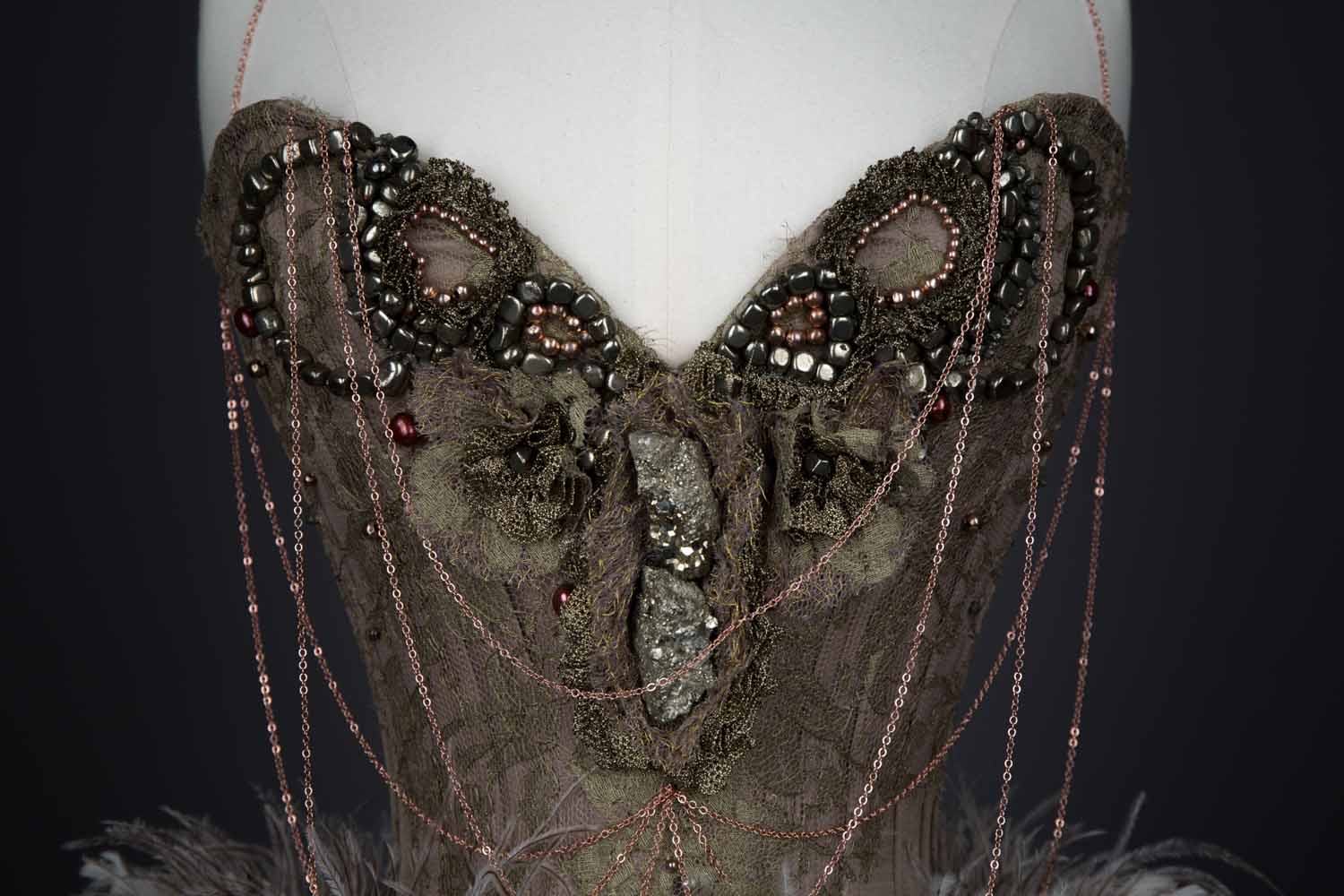 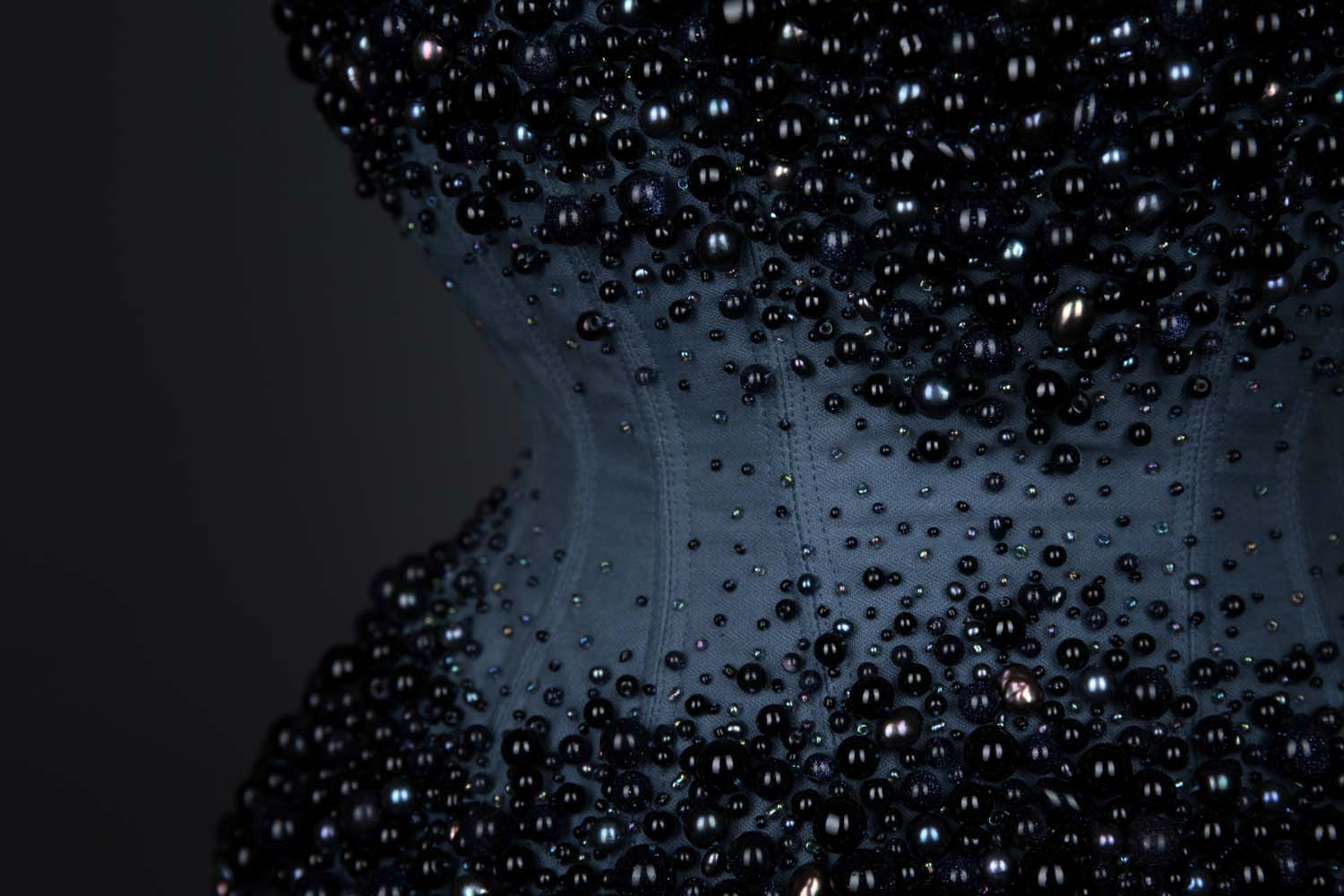 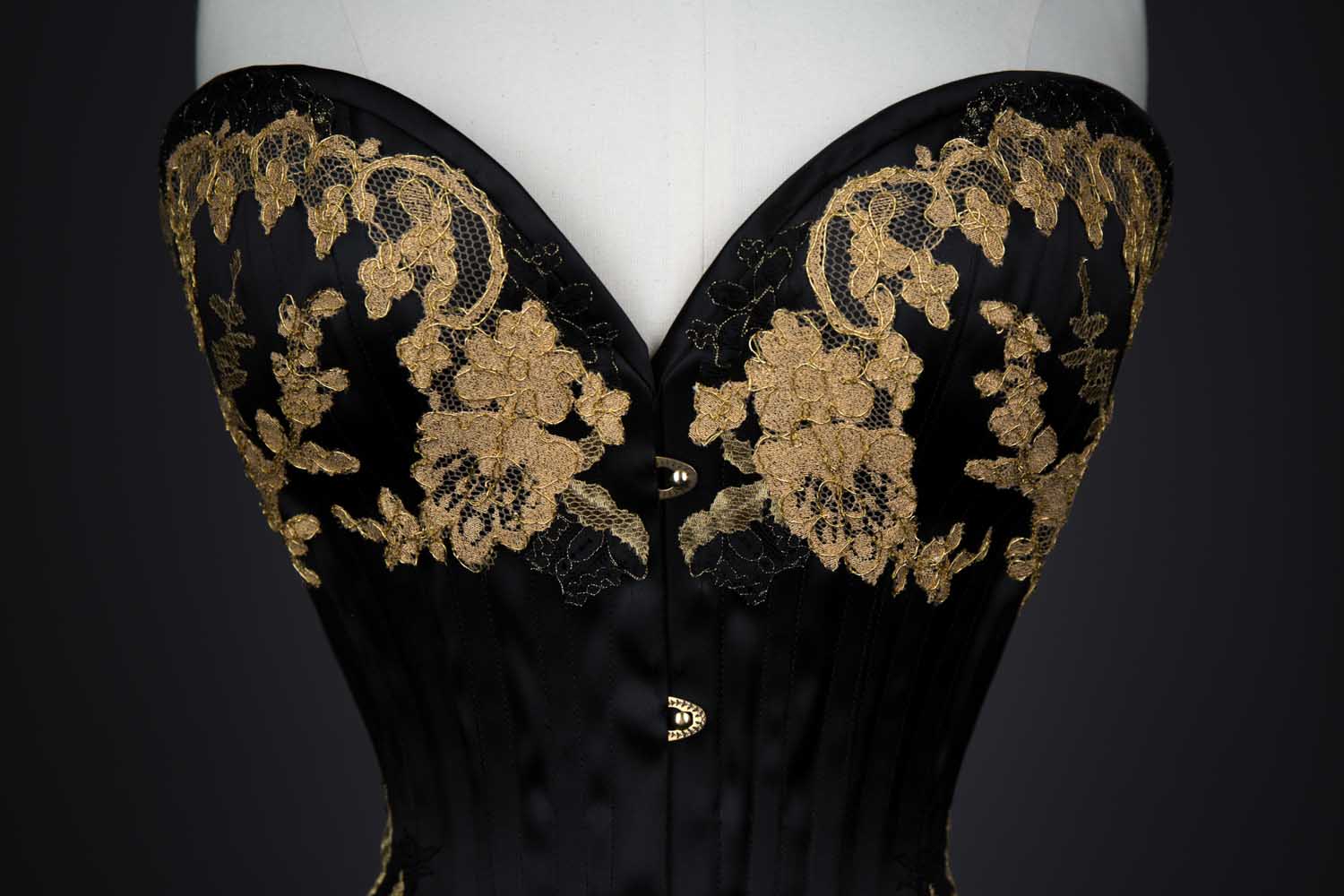 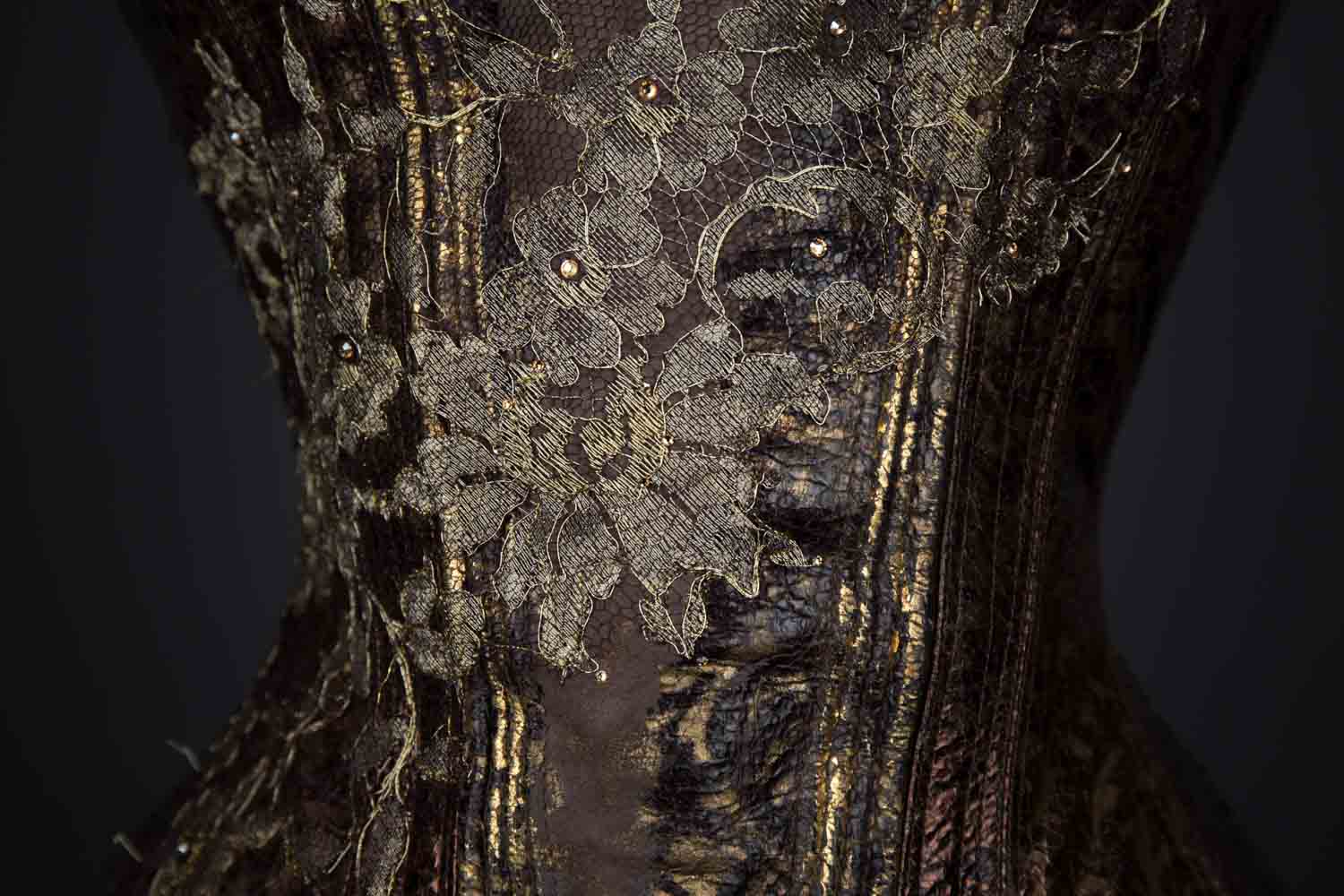 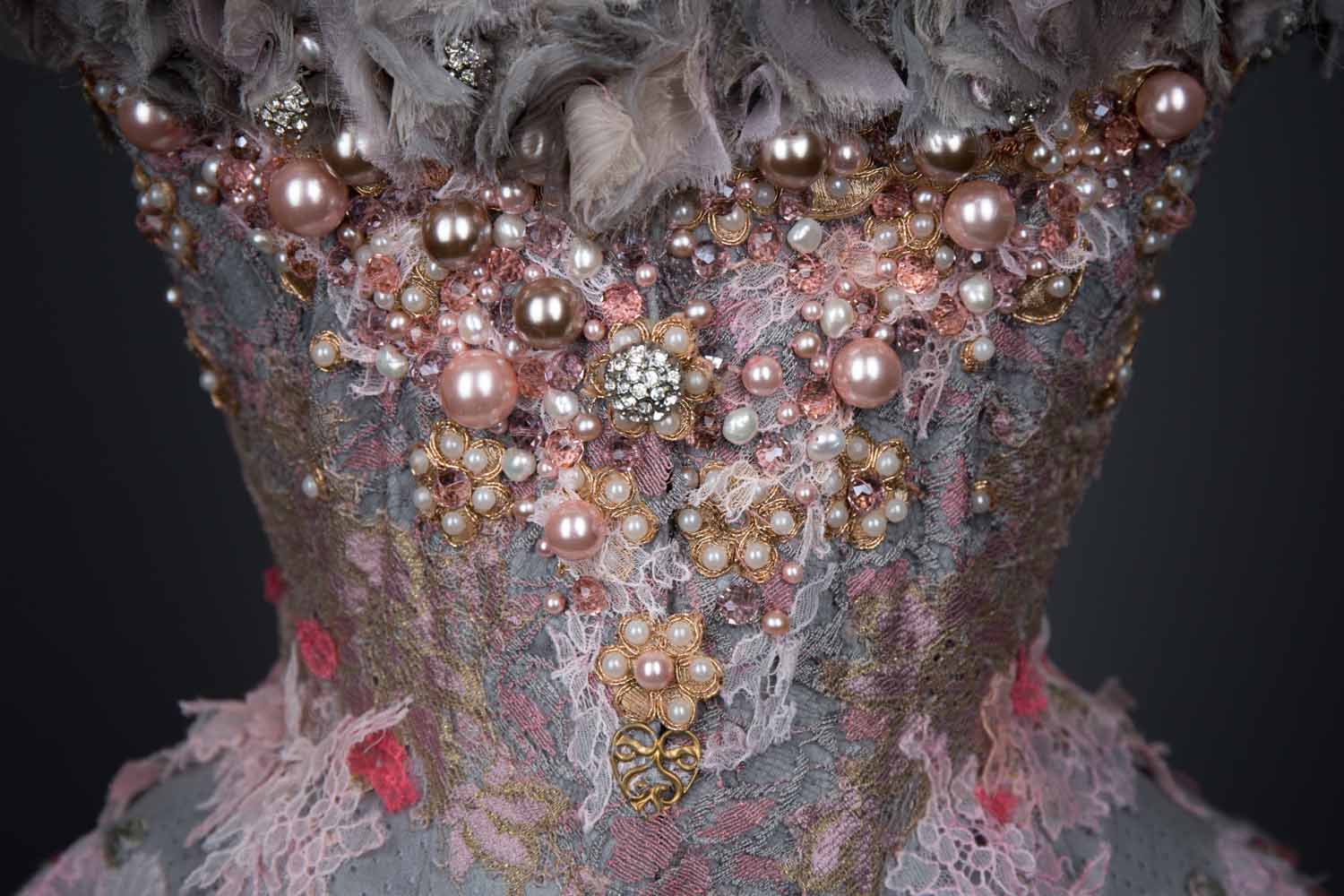 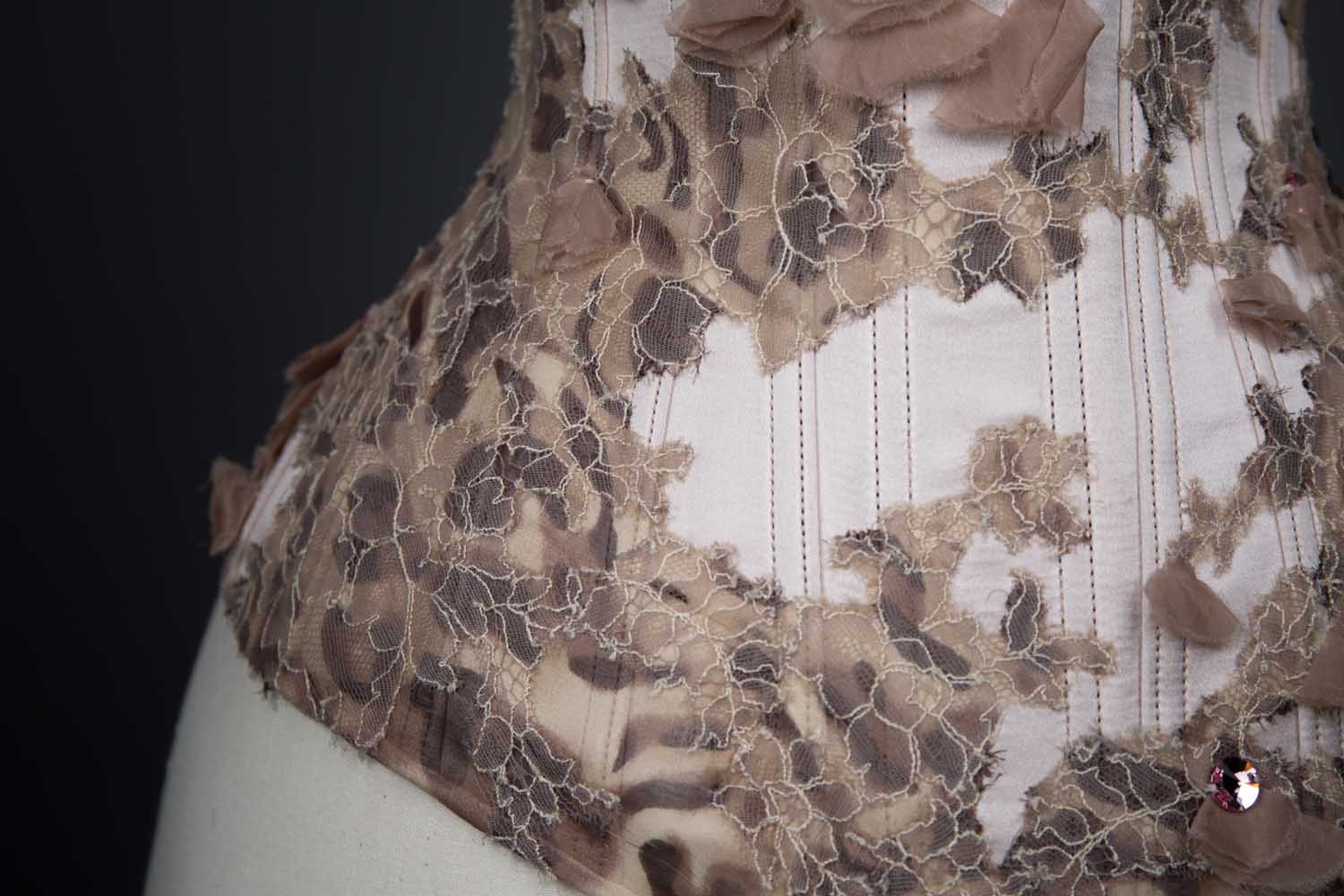 With special thanks for funding the main photoshoot for this exhibition at the Oxford Conference of Corsetry 2017:

Chapter 5: The Corset As A Canvas, Part 1

Chapter 6: The Corset As A Canvas, Part 2